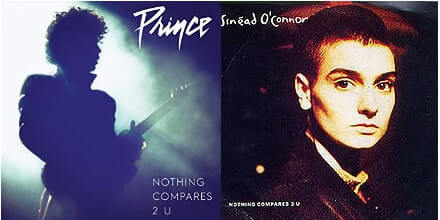 Prince was a very generous songwriter. Out of the thousands of songs he wrote, he gave away hundreds to artists (mostly his protegé groups such as the Time, the Family, Sheila E. and Vanity 6). Others have decided to cover his songs, and most of the time a cover isn’t as good as the original.

And that’s the case with Prince covers. One Spotify playlist has 396 cover versions of Prince songs, and many are unlistenable. You just can’t improve on perfection. I mean, why does the world need another version of “Purple Rain,” much less 49 versions?

But there are some rare moments. In a few cases, a cover stands up to Prince’s original recording and sometimes, believe it or not, is even better than his effort. Here are the 10 best Prince covers:

Not one of Prince’s strongest ballads, “Do Me Baby” is plodding and at almost eight minutes goes on way too long. Meli’sa Morgan slows it down even more but adds more instruments and production to fill in the sparse arrangement by Prince. While Prince’s version failed to chart, Morgan’s version hit No. 1 on the U.S. Hot Black Singles chart and peaked at No. 46 on the Hot 100.

In demos for the Time, Prince dictated exactly how each song was supposed to be played and sung, right down to the voice inflection. Lead singer Morris Day had to practice for hours to get his voice to match Prince’s. So the versions sung by Prince and the Time should sound exactly the same, right?

More or less; Prince’s estate released “Jungle Love” and “Gigolos Get Lonely Too” on the Originals album, and demos exist of songs such as “The Bird” and “Chocolate.” But the Time’s musicianship was flawless, and they also had Morris Day, who had his own cocky, pimped-up personality. To borrow a cliche from “American Idol,” he made Prince’s songs his own, regardless of how much they sounded alike.

It’s hard to improve on Prince’s original B-side to “1999” (What a record!). Some might point to Alicia Keys’ 2001 version of this song as the best cover, but it sounds too much like the original. Instead, Stephanie Mills’ 1983 version gets the nod. It sounds a little dated, but Mills’ strong voice forms the basis for a jazzy arrangement complete with horns, with the piano getting less emphasis.

Crenshaw, a pop singer-songwriter with his own merits, takes Prince’s baroque pop masterpiece, drops it down from A major to G major and fills it full of guitars, with one droning a high G throughout the song, giving it a solid foundation. You don’t even miss the strings.

Rae doesn’t do much to change this song, and she doesn’t have to. The music is perfect the way it is. Instead, she lets her voice take center stage, and she transforms the song from a pushy, overtly sexual song into something more flirtatious and sexy.

When you hear Prince’s version on the Originals album, you can see how much better Sheila E. does it just by listening to her drumming alone. Not blessed with the strongest voice, Sheila E.’s amazing percussion carries the song, which went to No. 1 on the U.S. Dance Club chart and No. 7 on the Hot 100.

Prince’s version is probably better here, but DiFranco covered it at a concert in 1999 in Minneapolis as a tribute to him and turned it into a bittersweet ballad that was hardly recognizable from Prince’s fast, new-wave version. Parliament-Funkadelic’s Maceo Parker, who would go on to play saxophone for Prince in the 2000s, accompanied DiFranco on the cover, which has never been officially released.

Honorable mention goes to Cyndi Lauper, whose version from 1983’s She’s So Unusual isn’t as energetic as Prince’s but still retains that New Wave sound.

Prince’s version sounds dated with its cheap synthesizers. And for someone who grew up listening to Chaka Khan’s version, Grandmaster Melle Mel’s rap and Stevie Wonder’s harmonica playing just seem missing from Prince’s version instead of the other way around.

The instrumentation on the Bangles’ cover is no different than Prince’s version on Originals. Part of the reason the Bangles sound is that Prince sang it as a duet with Purple Rain co-star Apollonia, who could neither act nor sing. She’s no Susanna Hoffs, that’s for sure. Side note: Hoffs grew to hate the line, “He tells me in his bedroom voice / C’mon honey, let’s go make some noise” and removed it in live performances.

Sinéad stole this straight out from under Prince’s nose, totally transformed it into a sad orchestral piece, and her sometimes gentle, sometimes shrieking voice is so much more emotional than what Prince does in his version. He resented this song’s popularity and added it to his setlists at concerts to remind everyone that he wrote it. He released a live version of the song with Rosie Gaines in 1993, but the original 1984 version was not released until 2018.