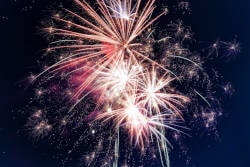 The United States of America has always been fodder for musicians — whether it’s singing the praises of the country (“God Bless the U.S.A.”) or questioning its treatment of veterans (“Born in the U.S.A.”).

There have been tons of songs about America — American culture, American women, American idiots, American boys, American teens, American soldiers, and even American spirits. That’s not counting the hundreds of songs that mention freedom, liberty or patriotism.

Discogs.com lists 17,895 singles that either have the word America in them (“America” by Neil Diamond) or are by a band with the word America in its name (like, um, America). Another 21,650 listed USA in the title (Surfin’ USA) or band name (USA for Africa).

Everyone has their own list of America songs, and they’re all the same. So for this July 4, here are 10 little-known songs about America—not the usual ones you hear. They’re songs from my collection, and I promise there will be no Springsteen, Simon & Garfunkel or Toby Keith on it.