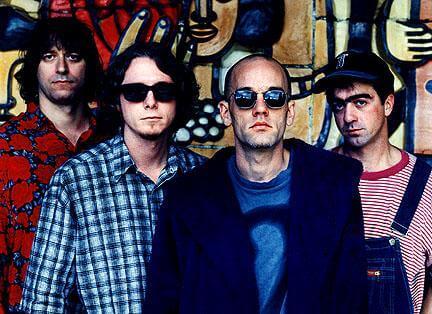 R.E.M. is an unusual band in that they have very few standout singles. Their popularity with fans lies with the substance and composition of their albums, with deep cuts that resonate with fans.

Finding the greatest R.E.M. songs, then, can prove to be difficult. With the exception of two or three songs, you can’t really find unanimity among R.E.M. fans. I think it’s a tribute to their longevity as well as their consistency.

Take, for instance, Lifes Rich Pageant. No one tune stands out (except maybe “Fall on Me”), but they are all perfect songs. Any of them could be in this Top 20.

I once heard a review that described Fables as “Southern gothic.” Nothing captures that feel more than this song — a haunting folk song that’s creepy and beautiful at the same time.

This much-maligned song doesn’t deserve most of the vitriol. The chorus to this song, with Peter Buck’s shiny arpeggios accompanying it, is a perfect antithesis to the bluesy verses and the hip-hop ad-libbing throughout.

There may be other songs that are better, but this song gets a top 20 nod for pulling R.E.M. out of their decade-long doldrums. It’s loud, energetic and happy – just the thing the group needed. Never mind lifting the melody from Kool & the Gang’s “Celebration.”

This one might be on everyone’s list. Their first single from their first album, it was as close to punk as they got, both musically and chronologically. It captures the energy and spontaneity that was alive in the group at the time.

“The time to rise has been engaged,” lead singer Michael Stipe proclaims in this booming opener from their last indie release. Bill Berry’s drumming is brought to the spotlight and propels the song from beginning to end.

This first cut from Green set the tone for a new R.E.M. — dare we say it? A pop band. You can actually understand Stipe’s lyrics as he sings along to an odd guitar riff from Peter Buck.

You can’t mention “Pop Song ’89” without mentioning its sister track, “Get Up.” Possibly the two best opening cuts on an album, they establish Green from the outset as something musical, accessible and fun.

Toward the end of the dark Fables of the Reconstruction, you’ll find this song, an uplifting tune with a chorus that you want to package up and crack open every once in a while when you’re feeling blue.

Listening to this cut from their second album, you realize that R.E.M. is not your stereotypical druggie college rockers that your parents warned you about. Their songs are melodic, even — dare I say it? — normal.

After several folk-rock albums, R.E.M. wanted to rawk and started it off with a bang — big guitars, big drums, and Stipe’s incoherent mumbling elevated to a growl. This opener will knock your socks off, and it’s one they wouldn’t approach in intensity until 2008’s “Living Well Is the Best Revenge” from Accelerate.

Of course this is one of the greatest R.E.M. songs. This track is so popular it has almost become a novelty song, but it’s loved by almost everyone. I lost so many calories dancing around to this song in college— a manic, pell-mell romp that defined my generation’s ADHD mentality. And I still don’t know all the words to it, but I do know when to yell “Leonard Bernstein!”

Ok, it’s probably the most overplayed R.E.M. song ever (next to “Everybody Hurts”), but I love me some mandolin. The construction of this song is immaculate, and Stipe’s lyrics are clear but mysterious. “That’s me in the corner / That’s me in the spotlight,” Stipe sings, as if he knows that this song will bring him the fame that he had managed to avoid for so many years.

The only saving grace from their unlistenable final album, it rocks and soothes at the same time. Bassist Mike Mills’ playing is superb, changing the sounds of the chords into something new and refreshing The only complaint is that it’s only one minute and 44 seconds long. You wish it would be twice as long.

The highlight of this album begins with a fuzzy guitar from Peter Buck, with Stipe announcing his undying love for someone: “I wanna be your Easter bunny / I wanna be your Christmas tree.” That’s all there is for most of the song until Bill Berry brings in the drums and Mike Mills joins in about 2/3 of the way through the song, and the result is joyous.

Many of the best R.E.M. songs are almost afterthoughts, number 8 or 9 on the track list.  Stipe begins the song with “”This could be the saddest dusk I’ve ever seen,” and it sets the mood for a heartaching song about loneliness. Inventive chord progressions, augmented by a harpsichord and mandolin, make for a beautiful but sad song.

It should be called “Bittersweetness Follows.” This song highlights my Autumn playlist, and it’s by far the best song on Automatic for the People. The group rolls out a cello for this one, and it’s so sad, so beautiful, your heart just pines for resolution and peace.

I’ve already waxed poetic about this song, so I stand by my previous description.

Like “Hairshirt” above, all I have to say about this song is summed up in this post.

The quintessential R.E.M. song, and as close to perfect as they ever got.