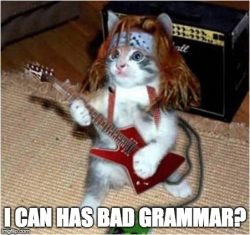 As a former journalist and being the son of an English professor and librarian, I’m sensitive to bad grammar in songs.

Recently, a friend of mine reminded me of how I used to make fun of Paula Abdul’s “Opposites Attract,” in which every verse begins with the words “It ain’t.” That got me thinking about other grammar violations in songs.

There are a lot of songs with bad grammar. Horrible, awful grammar. So many, in fact, that I’ve had to limit my search to only the worst offenders. Here are the most grammatically incorrect songs in music, grouped by type of grammar felony.

Songs with Bad Grammar in the Title

Improper use of the objective pronoun

Improper use of the Comparative and Superlative

I learned this one from Mrs. Jenkins’ seventh grade English class. “Lie” is for lying down, to make oneself horizontal on a surface; it does not carry an object. “Lay” requires an object, i.e., you’re laying something on a table. Easy enough, right? Apparently not:

Making Up Words to Complete a Rhyme

Lee Greenwood, “God Bless the U.S.A” – “I’m proud to be an American, where at least I know I’m free.” At first glance, this seems okay. But Regina over at AmIRight.com exposes the grammar offense. Her analysis is spot-on:

While the singer’s patriotic sentiments are touching, the relationship of dependent and independent clauses here just doesn’t work. That is because the connector, “where”, is a place-referent connector and therefore needs an antecedent of place in the independent clause. But there is no antecedent of place. That is to say, “I’m proud to be in America, Where at least I know I’m free” would work grammatically, but the actual lines here don’t, since “an American” does not imply a place, but is followed by “where”, which needs to refer back to a place.

That’s so snobby. I love it — especially when describing such a snobby, pompous song as “God Bless the U.S.A.”

Finally, I’d like to clear up a misconception about what continually comes up as bad grammar: Paul McCartney and Wings’ “Live and Let Die.” Many have interpreted the lyrics at the beginning of the song as “But if this ever-changing world in which we live in / makes you give in and cry,” and note the two “in”s as a grammar faux pas.

But the correct words could also be: “But if this ever-changing world in which we’re livin‘.” So not only would McCartney avoid a grammar felony, but he would also manage to avoid ending his sentence in a preposition. Bravo, Paul! Now if you had just taught John in “Ticket to Ride” that it’s “She doesn’t care” instead of “She don’t care”…

Coming up next, our grand prize winner. I give you one of the worst offenders of the English language I’ve ever seen. The queen of the bad grammar songs. (Hint: Her name rhymes with fiancé.) I’ll sign off now before my Grammarly plugin breaks.