2018 Rock & Roll Hall of Fame Inductees: The Good and the Bad 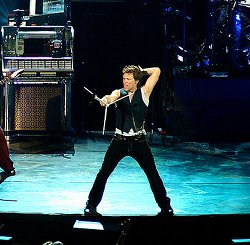 I don’t have a problem with most artists on this list, especially the Cars, who deserved to get in a long time ago. They bridged the gap between punk and New Wave, and had numerous top 10 hits. Robert Palmer, music critic for The New York Times and Rolling Stone, described the Cars’ musical style as such: “they have taken some important but disparate contemporary trends—punk minimalism, the labyrinthine synthesizer and guitar textures of art rock, the ’50s rockabilly revival and the melodious terseness of power pop—and mixed them into a personal and appealing blend.” It’s about time they got in.

What really irks me is the inclusion of Bon Jovi. This was clearly due to their fans bombarding the site with votes (and unfortunately, there are a bunch of them still out there, mostly middle-aged women who still fantasize about making it with Jon Bon Jovi). Bon Jovi were simply boy toys whose glam/hard-rock sound caught on right at the height of the hair band era. “You Give Love a Bad Name” and “Livin’ on a Prayer” were the 80s at their worst. Wearing their skin-tight pants and denim jackets, the band was more interested in getting laid than getting critical acclaim.

Their longevity is the only thing they have going for them, but even that is due to the afore-mentioned middle-aged women who will buy anything Mr. Bongiovi puts out (so to speak). Their talent is questionable, their discography unimpressive. Granted, Rolling Stone never liked them, but they have zero albums in the Top 500 albums of all time. Rolling Stone founder Jann Wenner, who also founded the Rock and Roll Hall of Fame, never liked them. “I don’t think he’s that important,” he reportedly said, according to Vulture. “What does Bon Jovi mean in the history of music? Nothing.”

Well, the fans’ voices were heard – at the expense of Radiohead or Eurythmics, both of whom deserved it more than the Aquanet poster children from New Jersey. Here’s hoping they’ll get in next year – unless Winger bumps them out.