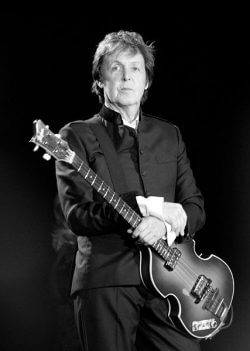 I’m sorry it’s taken me so long to wish you a happy 70th birthday. I’ve been bad. Didn’t even tweet about it, and how long does that take, 10 seconds? (Granted, you probably got about 2.7 million birthday wishes via Twitter. I think it was even a trending topic for a while in between Justin Bieber and Lebron James.)

But really, how can you pontificate on such a long and distinguished life in 140 characters? That’s only two characters for every year you’ve been alive. And now that I think about it, how can I really say anything new here on my blog that hasn’t been said before? Yes, you’re from another planet, you’re a living legend, you’re a hit-making machine. Blah, blah, blah, yeah, yeah yeah. (Don’t get me wrong, you deserve all of those accolades. But I’m sure they must wear thin after a while. How can you still stand there and be gracious time after time? I know I would be just like Chris Farley if I ever actually met you in person, asking those exact same questions.)

Allow me for a moment to be bold. You were amazing as a member of the greatest band ever, but as a solo artist, you’ve had your share of flubs – some songs that seem like overprocessed by-products of your hit-making machine that you decided to throw on albums anyway. (“Check My Machine,” anyone?) But for every dud and for every hit you have created, there is always one hidden jewel that few people have heard. It hasn’t become part of the background and consciousness like “Band on the Run” or “Silly Love Songs.” It sounds fresh and unwrapped. It’s as if you were cleaning out your closet and casually cast off a Picasso on the side of the road for someone to pick up.

So as you look through the backyard of your life, as you say so eloquently in 2005’s “Promise to You Girl”, here are seven underrated Paul McCartney songs (one for every 10 years of your life) that you never really hear on the radio. I think you only released one as a single. Happy birthday, and oh, when’s the next jewel coming out?