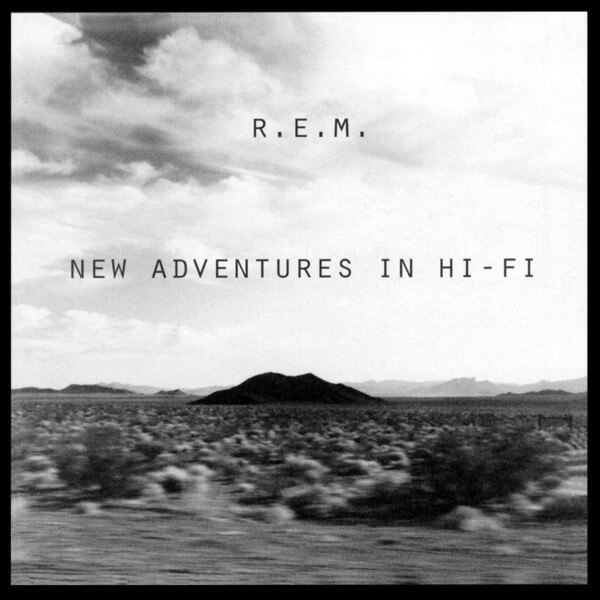 In 1994, fresh off their mega-million selling Automatic for the People, R.E.M. decided to go hard. Very hard. Their follow-up, Monster, was brash and noisy, with tremolo guitar effects threatening to kill what little harmony Michael Stipe could generate from the songs. It seemed as if they were trying to catch up with the grunge movement that Kurt Cobain and Nirvana had started a few years earlier, and the result, despite my numerous attempts to connect with it, was disappointing.

So when the band announced quickly after their disastrous world tour in 1995 (three of the four band members had to have emergency surgery for various ailments, the most serious being drummer Bill Berry’s brain aneurysm) that they had recorded songs while on tour and would quickly be releasing a follow-up, I was dubious. New Adventures in Hi-Fi sounded half-baked, half-planned, half-assed. And based on the first (and only) listen, my suspicions were confirmed. This was Monster II, and I could hear very little thought being put into the songs. The first single, “E-Bow the Letter” was a dreary, tuneless dirge that made “Drive” sound like “Shiny Happy People.” The CD quickly went in the To Sell pile, and my relationship with the group never really recovered.

Almost 20 years later, I was reading Perfect Circle, the wonderful biography on R.E.M. by Tony Fletcher and discovered several things:

Convinced that I must be missing something,  I decided to give the album another try. And granted, it took me several listens to get through the whole album. But then I started hearing things.

The songs of New Adventures in Hi-Fi

It starts with “Be Mine.” “I’ll strip the world that you must live in / Of all its godforsaken greed / I’ll ply the tar out of your feathers / I’ll pluck the thorns out of your feet,” Stipe confesses in a grungy guitar-driven ballad that sweeps you off your feet. If features very little percussion, reminding me of an outtake of Liz Phair’s Exile in Guyville — inventive chord changes, a chorus that breaks your heart with its sweetness, and a wonderful blossoming 3/4 of the way through the song, where Bill Berry finally decides to play drums and make it less of a demo. It’s an instant R.E.M. classic.

Others shine too. “Wake-Up Bomb” was one of the songs I skipped over for being too Monster-ish, but I failed to notice the nods to glam rock and Mike Mills’ wonderful keyboard playing. “I look good in a glass pack / I look good and mean / I look good in metallic sick wraparound blackout tease,” Stipe proclaims, name-dropping Queen and T.Rex in the chorus. I remembered that R.E.M. used to rock back in the Lifes Rich Pageant days. This was Monster without the tremolo guitar effects and mushy feedback. It was much more accessible.

Leave featured a somber melody on the acoustic guitar for the first minute before launching into an almost unlistenable synthesizer loop, and Peter Buck traded his acoustic guitar for an electric guitar to play the same melody over the loop. The resulting cacophony drove the song from sadness to madness. Rarely had I heard R.E.M. so emotionally wrought.

Departure was another ode to glam rock, with Buck unleashing a memorable guitar riff. Stipe spoke most of the lyrics before launching into the sing-song chorus, “Here it comes (I’m carried away).” Again, I was reminded of Lifes Rich Pageant and less of Monster.

Like most R.E.M. albums, the song quality tended to dip somewhat in quality toward the end, but the most radio-friendly song on the CD was the last one, “Electrolite.” Sounding like a cross between “Nightswimming” and “Man on the Moon,” it leaned heavily on Mills’ piano playing. I’m surprised it wasn’t the first single; perhaps if it had been, it would have remained in my CD collection all these years.

But I’m glad I rediscovered New Adventures in Hi-Fi; I still hate “E-Bow the Letter,” but the CD now ranks in the Top 10 of R.E.M.’s releases; it showed that they still had something left after all those surgeries.