‘We Are the World’ – USA for Africa 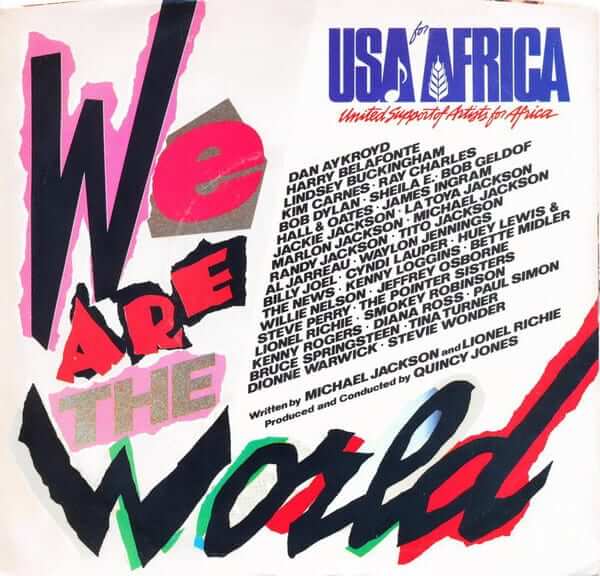 I’m sure putting Dan Aykroyd at the top of the list of stars probably cost USA for Africa a few hundred thousand dollars in sales.

(A Song That Makes Me Laugh)

I’ll admit that “We are the World” probably did some good for this planet. It raised some $51 million toward famine relief in Africa. After its success, one could argue that with USA for Africa, music became a force for good, more than just a political statement. My God, music could change the world! Live Aid! Sun City! Farm Aid XXVII!

All that success and money came from a song that was so full of pompous, self-congratulatory crap, written with a sentiment that was micro-thin and overproduced to the point of nausea. It was a cookie-cutter record — one that writers Lionel Richie and Michael Jackson probably spent half an hour on — but it was designed, no, engineered to pull at the heartstrings, filled with words like “helping hand,” “someone cares” and “better day”. It was widely ridiculed for including the words, “There’s a choice we’re making.” Both Richie and Jackson were endorsing Pepsi, whose slogan was . . . wait for it . . . “The choice of a new generation.” Did Pepsi pay for the recording?

But what makes this song so laughable, so thoroughly enjoyable, is the cast of characters. Who thought it was a good idea to have Willie Nelson, Steve Perry, Cyndi Lauper and Ray Charles sing on the same record? I like ketchup, peanut butter and peaches. Don’t want them on the same sandwich.

These artists, acting all dramatic and grim (“Remember, everyone: starving kids!”), try to eke out every bit of sentiment out of their parts, to the point of either oversinging or…well, there’s just a lot of oversinging going on.

Lionel Richie gets to sing first, because he wrote it. Michael Jackson gets most of the chorus and the first part of the bridge, because he wrote it too. Willie Nelson tries to sing harmony with Dionne Warwick and fails miserably; he’s followed by Al Jarreau, a 180-degree change in style. But don’t get comfortable with him, because we’ll spin you another 180 degrees with Bruce Springsteen, who seems to be singing while giving birth to the world’s largest kidney stone.

Bridge: More oversinging! Steve Perry! Huey Lewis! A cringe-inducing wail by Cyndi Lauper! And then, for the climax of the song…

Oh Lord, it’s not over yet. We have to suffer through a key change, a multitude of oversinging together during the never-ending chorus from an all-star choir that for some reason includes Dan Aykroyd, Tito Jackson and the Pointer Sisters. During that chorus, we hear the familiar bleating of one Bob Dylan, aimlessly wandering around the song in search of the right pitch. The song ends with some ad-libbing by Ray Charles, and thankfully it comes to an end.

Prince was widely criticized for not joining in the massive mutual admiration society that was USA for Africa, even though he donated a song to the album. “He felt like the song was horrible,” said Revolution guitarist Wendy Melvoin in Alan Light’s Let’s Go Crazy: Prince and the Making of Purple Rain. “He didn’t want to be around all those muthaf—kas.”

“We Are the World” came and went pretty quickly — only four weeks at No. 1. It was a small victory for the Yanks; at a time in which Duran Duran, Paul Young and Tears for Fears ruled the U.S. charts, it was only fitting that the United States’ response to Band Aid’s “Do They Know It’s Christmas” be so limp, self-serving and lukewarm.