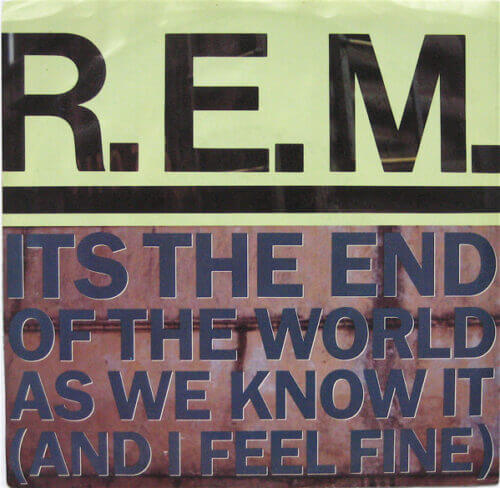 (A Song to Dance to)

The 1980s were chock full of melodrama. In other words, it was the perfect decade to be a teenager. Oh, such pretentiousness, such self-pity and introspection. Everything had to mean something.

You wore a skinny tie and lightweight jacket to show that you were classy, but not too serious. You watched Pretty in Pink 17 times because dammit, something about Duckie just spoke to you. And you listened to New Order, R.E.M. and U2 because they were an “alternative” to the silly pop music that you were just listening to the year before.

I especially took to R.E.M. Hailing from nearby Athens, Ga., they seemed to be flipping off the status quo, much as the Sex Pistols did a decade earlier, only they seemed to do it in a more musical and poetic way.

1987’s Document was the band’s breakthrough album, with “The One I Love” breaking the Top 10. But I was instantly attracted to the hyperactive “It’s the End of the World as We Know It (And I Feel Fine).” Rocketing along at more than 200 beats per minute, it conveyed such a sense of anarchy, a feeling of blind, joyful hopelessness.

We were just emerging from the Cold War, and I had spent most of the 1980s waiting for Ronald Reagan to send us into World War III. Michael Stipe’s declaration was a welcome relief to me. At least someone else realized it, and I found a kindred spirit to share my anxiety.

That same year I finished my first year of college, and there I found other kindred spirits — people who not only liked the same type of music I did, but they also danced to it. I usually sat in my room and listened to an album; you danced to Prince and Michael Jackson, not INXS and the Cure.

But I learned quickly. Soon we were all flailing away to the Violent Femmes, throwing our arms up in the air and turning around while jumping up and down. We did our best shoegazing while Modern English’s “I Melt with You” played. We even got funky with Cameo’s “Word Up!”, but it was somehow different from dancing to Chaka Khan in high school.

“It’s the End of the World As We Know It (And I Feel Fine)” was a departure for R.E.M. “I wanted it to be the most bombastic vocal that I could possibly muster,” Stipe said in Tony Fletcher’s Perfect Circle — The Story of R.E.M. “Something that would completely overwhelm you and drip off your shoulders and stick in your hair like bubblegum.” It apparently didn’t sit well with guitarist Peter Buck, but he eventually warmed to it after hearing bassist Mike Mills’ vocal additions to the chorus.

Dancing to the end of the world

And when “It’s the End of the World As We Know It” came on, we would emit a barbaric yawp, lament the end of civilization for a second, and then expend every ounce of energy for the next three minutes in what probably looked like an epileptic seizure during an aerobics class.

It was literally a dance of joy. We were celebrating newfound freedom and friendships, and working out remnants of leftover teen angst and frustrations over Economics class. Already out of breath, we tried keeping up with Michael Stipe as he rattled off words such as earthquakes, hurricanes, cheesecake, jellybean and the rapture, and phrases like book burning, automotive incinerate, government for hire, wire in a fire and a tournament of lies. We barely knew who Leonard Bernstein or Lenny Bruce were, but we screamed their names at the right time along with all the other stream-of-consciousness terms Stipe threw at us.

And as the final strains of the chorus faded away, we all gasped for breath, our threadbare T-shirts dripping with sweat, still singing at the top of our lungs, “I can have some time alone.” But we really didn’t want that. We had each other, and we had our music. Who cared about Armageddon?