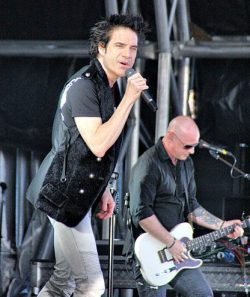 A Song You Hear on the Radio

Train is the most unobjectionable band in the world right now (Sorry, Maroon 5). Even this writer, who hardly ever sits on the fence on a topic, can’t seem to muster enough of an opinion on this spectacularly ordinary band. For example:

They are the absolute middle of the road, so much, in fact, that you can hear them everywhere – elevators, restaurants, television. “Lite” Adult Contemporary radio stations play Train just to sound edgy. Hot pop stations that cater to Katy Perry play them because it’s music that tweens’ parents don’t find objectionable.

Of course, Adult Alternative stations eat them up because their listeners, ages 35-44, like hearing someone their age still rocking. Last year’s monster smash, “Hey, Soul Sister,” was released in 2009, was the No. 3 song of 2010 and is still on AAA radio station playlists.

I could take them or leave them. I liked their first two hits, “Meet Virginia” and “Drops of Jupiter”; they were catchy and likable, with just enough angst, throat singing and electric guitars to make you feel like you were listening to rock and roll. And I didn’t dislike their albums. They were non-threatening and agreeable. I tolerated them without throwing them away.

“Hey, Soul Sister” is just as disarming. My kids sing it around the house. I hear it on commercials. The song has yet another catchy chorus and makes cool 80s references to Madonna and Mr. Mister. Despite its awkward lyrics (“untrimmed chest”? “You’re so gangsta, I’m so thug?”), “Hey, Soul Sister” is like peanut butter and jelly – something you devour every day, has little nutritional value, but is tasty and safe. If that’s the way you like your music, then great.

I don’t care one way or the other. Really.