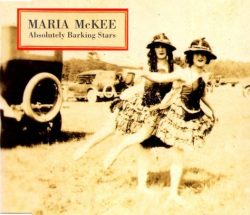 I am mystified by my obsession with Maria McKee’s Life Is Sweet. I tried several years ago to explain what it is about the album that touches me so, but I don’t think I did a good job.

This album went almost unnoticed; McKee, best known as the lead singer for the alt-country band Lone Justice, took a total 180-degree turn from her previous albums and released a raw, powerful collection of songs that hit at the core of my being. Or as McKee says in “Absolutely Barking Stars,” “She plays Pandora with my soul.” It’s as if she is trying to purge some demons from her mind while welcoming angels at the same time, not knowing who was coming or going. But in the process she releases every emotion imaginable.

Aside from a few phrases such as the one above, I have no idea what the third cut, “Absolutely Barking Stars,” is about. The lyrics are pretty abstruse (e.g., “Her apron strings are trailing out like sparks / Her comet tail is whipping, slicing up the dark”). But the song is a microcosm of the entire album: sometimes soothing, sometimes angry, but mostly glorious.

The song begins with an electric guitar, and Maria McKee’s voice is almost whispering. But the chords change from major to minor in the second measure – something you don’t hear too often that early in a song. She doesn’t stop there, though: In the pre-chorus, the chord progression hits three minor chords in a row, building in tension as her voice, which was earlier almost whispering, is now sounding more anxious and louder.

Then the chorus, the majestic chorus, resolves back to the main key, and McKee’s voice, now double-tracked, cracks in jubilation as strings join in the angelic chorus. Her voice splits into melody and harmony later as she sings with herself, like she’s battling her alter ego. Soon the chorus gives way to a powerful, feedback-laden guitar sequence, and then it’s back to McKee to ramp it up again.

“Absolutely Barking Stars” leaves me breathless each time I hear it. You may get it, you may not. But listen for the changes in chords, the change in tension and volume, the different textures involved in each part of the song. And appreciate how Maria McKee can go from a whisper to a glorious diva in a matter of measures.