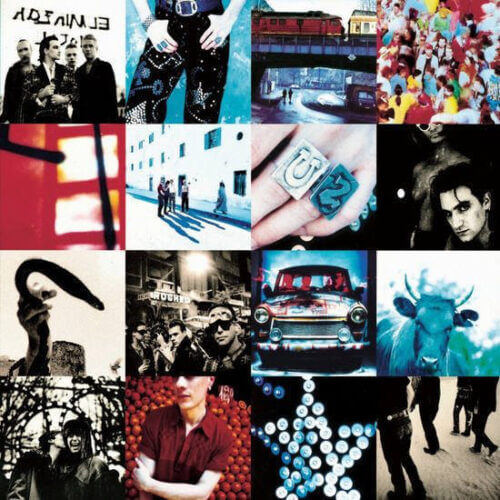 When I first heard U2’s “The Fly” from their album Achtung Baby, I was ready to embrace this new sound that was rumored to be coming from the band. “The Fly” seemed somewhat like their old music, but more manic, more electronic. But it still had soaring vocals in the chorus, and I held out hope that they wouldn’t do anything stupid.

So much for hope. When the album came out, it sounded nothing like the U2 of old.

As Bono was fond of saying, Achtung Baby was “the sound of four men chopping down The Joshua Tree” (which, to the horror of U2 fans, was actually done to the real Joshua tree in Joshua Tree National Park — the one that was featured on the cover of the album).

Gone were the Edge’s chiming guitars, Larry Mullen’s heartbeat-like tom-toms, and Bono’s plaintive voice. It was straight out of the underbelly of Europe, with all its vices and depravity. The album was industrial, sometimes bordering on techno, with Bono using sound effects on his voice, double-tracking it in octaves. The Edge’s guitar was distorted, using many different effects. Mullen’s drums seemed at times to be replaced by drum machines and hip-hop loops.

So what? you may ask. Bands change their sound all the time. You’re criticizing them for daring to be different?No, I’m saying their “different” sound simply wasn’t that good. The songs seemed tired and contrived, with precious few original ideas on the album. I was so disappointed that I tossed the CD after a few listens.

Over the years, I have tried to appreciate U2’s experimental phase — Achtung Baby, Zooropa and Pop — and for the most part, I have failed. Certain songs on Achtung Baby appeal to me now — “The Fly” is still exciting, and “Who’s Gonna Ride Your Wild Horses” is filled with emotion and yearning, despite its flimsy lyrics. And while “Ultra Violet (Light My Way)” is a retread of some of their older material, it’s more satisfying than any of their experimental tracks.

Listening to the “Kindergarten” remixes, which was part of the “Super Deluxe” version of Achtung Baby, featured stripped-down demos without the experimentation, and it helped me hear more of the melodies. There’s something there. It’s just hidden behind a lot of dissonance, distortion and feedback. It also suffers from overproduction.

Analyzing this album for a second time 30 years later, I find that the music doesn’t bother me as much as the lyrics do. The lyrics, which are obviously more personal and deal with relationships, are full of double entendres that are definitely not the U2 I grew up with:

Other lyrics were just elementary, as if Bono were in a hurry to write something down:

Their signature hit, “One,” seems like they backpedaled and tried a little too hard to recreate “With or Without You.” It’s one of the better tracks on the album, but it’s too overbearing and preachy even for me.

The bad outweighs the good here. “Tryin’ to Throw Your Arms Around the World” is repetitive in both music and lyrics, “So Cruel” is plodding and murky, and “Acrobat” is tuneless. “Mysterious Ways” is by far the worst track, sounding like a new single from Jesus Jones.

I know I’m in the minority here. Almost all critics embraced the group’s bold step away from their traditional sound and praised Bono’s more personal lyrics, which took root after the Edge’s marriage fell apart. But why did The Joshua Tree need chopping down? U2, for all their pretentiousness, preachiness and self-importance, worked as a band. They threw all that out with Achtung Baby. And even though they returned to their roots with subsequent albums, I still haven’t quite forgiven them for skydiving over the edge and becoming the pricks that many people thought they really were. They flipped the music world off, and I flipped them off right back.