Album of the Year: Oddities and Entities, Andy Reed 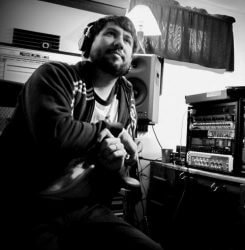 When I got my copy of Andy Reed’s latest EP, Relay Vol. 1, a few weeks ago, he was kind enough to include a copy of his rarities release from 2014, Oddities and Entities. Unfortunately, I didn’t know of Reed’s talents last summer and missed this collection.

Hesitant to hear a mishmash of “oddities” – compilations always sound half-baked and thrown together – I was surprised to hear that it was not only complete, but it sounded like an album that had been recorded all at once instead of over 13 years.

And what’s more, the album is good. Really good – so good, in fact, that I’m waiving my rule that Album of the Year has to be released in the same year.

Oddities and Entities spans 22 tracks, and almost every track is a classic. A few are covers – “Thunder Island” and “Things Can Only Get Better” are from Andrew Curry’s tributes to 70s and 80s music, and there are some Gershwin and Elvis Costello tunes. But most of the rest are pure Reed, some solo and some with his work with other bands, and the melodies are abundant throughout.

“Make Up Your Mind” is pure power pop, with electric guitars taking front stage, while keyboards are one of the main instruments on the whimsical “Always on the Run.” “Comic Book Hero” sounds like some teen surf movie theme but settles into a singable chorus. And “The Criminal” begins with a soft acoustic guitar, wistful and light, but the chorus is glorious, changing keys with Reed’s tenor voice reaching to new heights.

The album really hits its stride about halfway through, with song after song that you swear is the best on the album. You finally find it on Track 15, “The Ballad Of…”, a six-year-old song that is light-hearted and poppy before settling into a dreamy chorus. Or maybe it’s two tracks later, with “Soft Target”‘s beautiful harmonies and acoustic guitars.

What’s really amazing about this album is that it sounds like an actual scheduled release of new material. Reed chose the sequencing carefully, remastering some tracks to give it an “album feel,” and the album indeed feels whole and complete. Buy it, and experience the best of Andy Reed in a surprisingly different way.