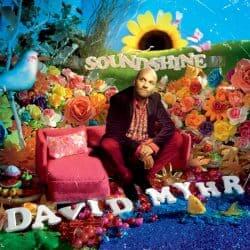 I was playing David Myhr’s Soundshine in the office a few months ago and was about three-quarters of the way through the 12 upbeat tracks when a co-worker grunted, “Boy, he sure is chipper.”

Yes, David Myhr is happy, and why shouldn’t he be? The former member of Sweden’s power pop band the Merrymakers seems to have unlocked one of pop music songwriting’s guarded secrets and has used it to craft 12 perfect pop songs that leave you, well, merry.

“I have noted that happy songs funnily enough sometimes seem to scare people away, and I think that’s a shame,” Myhr told me recently (check back Monday for the full interview). For some, happy songs bring to mind butterflies, rainbows and ponies, but cool rock stars are supposed to stare at their feet in dejection, or snarl at everyone in anger.

But again, why is happiness a bad thing? There is nothing like a song that can evoke smiles. Music can elicit every emotion possible from us, and sometimes a song can do what a kind word from a friend simply can’t do. That’s why we dance, right?

Soundshine, Myhr’s first solo album, certainly doesn’t start that way. “Never Mine” is in a minor key, and Myhr laments that “you were everything I ever hoped to find / I was always yours, but you were never mine.” But even this melancholy song rolls along at an uptempo, syncopated pace that recalls 10cc’s “The Things We Do for Love.” And it’s all uphill from there.

Every single song on his debut solo album shines with a stunning quality and consistency that is rarely found on an LP anymore. It’s an album that’s been about 10 years in the making, and Myhr doesn’t disappoint. These songs have been either demoed or swimming around in his head the whole time, and Soundshine gives him a chance to burst forth with songs so melodic, so instantly catchy, that you feel as if you’ve heard them your entire life.

A child of the 70s, Myhr wears the badge proudly. The first single, “Got You Where He Wanted,” features a driving, pulsing chorus with Myhr on infinite Jeff Lynne/ELO vocal reverb. “I Love the Feeling” begins with a Queen/”You’re My Best Friend” electric piano accompanying ethereal Beach-Boy vocals that will make your head swoon.

But Myhr is only emulating, not imitating his idols; it’s all part of doing what he has learned. AM radio during the 1970s was full of light, cheery music that demands a revival: Andrew Gold’s “Lonely Boy,” Pilot’s “Magic” and yes, ABBA’s “Mamma Mia.” He has created music that recalls the music of that era while bringing it into the 21st century and stamping it with his own brilliant touches.

Many of these songs are mainly about the joys of being in love. There’s nothing easier to write about; Myhr’s clear, made-for-radio voice soars on “I Love the Feeling” when he proclaims with simple honesty, “I love the feeling that I’m feeling when I’m looking at you.”

Soundshine is made for those moments of pure happiness. It doesn’t get any better than this.

Listen to the brilliant Soundshine teaser – “Don’t bore us, get to the chorus” (via Soundcloud)