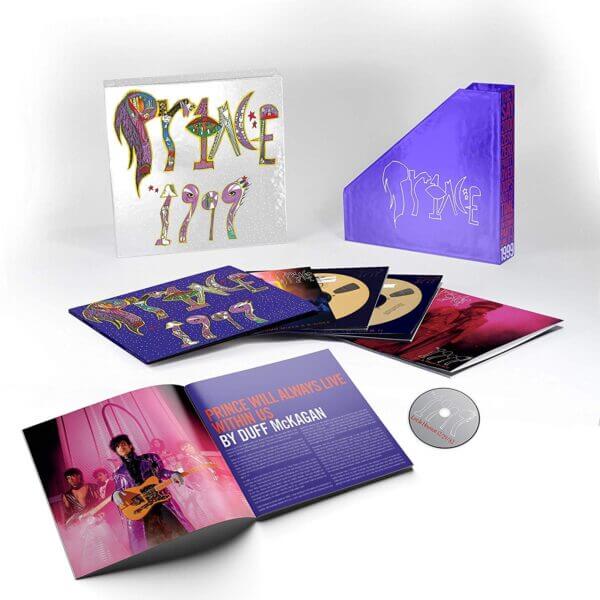 Over the past two years, we’ve heard Prince by himself with a piano, experienced his original songs that he gave to others, and marveled at the unreleased songs we heard on the Purple Rain reissue.

Prince’s estate is being less stingy with his music, issuing five CDs and one DVD full of material from the 1999 era. 1999 (Super Deluxe Edition) is a look back at his most prolific songwriting days, and we get a lot of it.

The first disc is just a remastered version of the original disc; while I’m sure audiophiles are complaining about the muddiness of the bass, or the mix of the drums being too loud (none of which I can confirm), I’m just happy to have a cleaned-up version of the album.

The set also offers a live CD from his Nov. 30, 1982 performance at Masonic Hall in Detroit, plus a disc of seven-inch single edits of the album tracks.

Where the real jewels lie, though, is in CDs 3 and 4 of the 1999 Super Deluxe Edition, which give us outtakes from the album that at some times rival what was put on the original album. Let’s face it: For a double album, 1999 has a lot of filler: “Automatic,” “All the Critics Love U in New York” and “Free” all went on too long. There are several great demos here that could have replaced something on this disc — especially “How Come U Don’t Call Me Anymore.” While this version is jazzier and more playful than the one released on the B-Sides compilation, it loses the lonesome, bar-at-1am sound of the original.

The same can be said for “Irresistible Bitch,” the B-side to “Let’s Pretend We’re Married.” The demo on this re-release is funkier but seemed destined for a Time track, as Prince falls into his imitation of Morris Day. Wendy and Lisa’s chorus is gone, which makes it sound more like a Prince song than a Prince & the Revolution song (to be fair, the Revolution was not a recognized band at the time).

There are some gems. “Money Don’t Grow on Trees” is an upbeat, melodic pop song that brings to mind “I Could Never Take the Place of Your Man.” The raunchy, guitar-driven anthem “Vagina” is powerful even with the lack of percussion, and the funk of “Rearrange” shows how funk and guitars go hand in hand. And “Purple Music,” a curiously-titled song that one would hope would wrap up all the elements of Prince’s music, finally gets released and is just as disappointing as the demos that fans have heard for years. Aside from the Linn LM-1 drum machine that’s present in most music of this era, the song is monotonous and repetitive. It’s still 1982 Prince, though.

We also get cleaned-up versions of other bootlegs that have been circulating for years: “No Call U,” “Do Yourself a Favor” and “Moonbeam Levels” all get a proper release now (even though “Moonbeam Levels” got stuck to the end of 4Ever, a hastily-compiled greatest hits album released seven months after Prince’s death.)

1999 was a breakthrough album for His Majesty, and “Little Red Corvette” and the title track are timeless classics. Adding all this extra music to a full release does the album justice and puts some context around Prince’s thinking and composition at the time. It’s for completists and those who want to know more about what Prince was like during his peak. Hint: He was close to perfect.