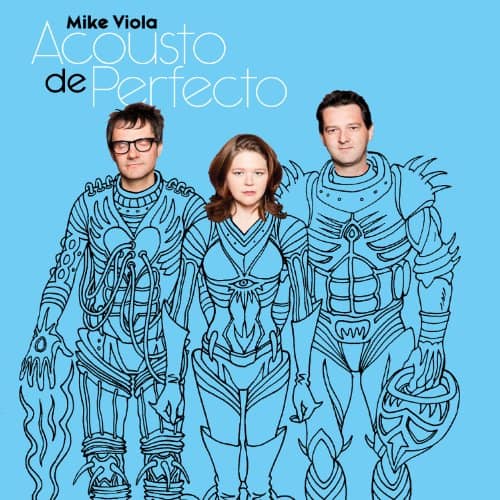 “Songs, songs, songs, they pour out of me,” sings Mike Viola on  “Secret Radio,” the opening cut from his new release Acousto De Perfecto. So much, in fact, that he’s had to release this companion LP to last year’s Electro De Perfecto to catch the runoff.

Unlike most B-sides and bonus material that artists throw at fans – songs that are mere afterthoughts or the result of some late-night binge – Viola’s throwaways are pure gems, gifts “for people like you I’ve been singing to all along/on my secret radio.”  It’s ery secret – the closest Viola has ever gotten to a hit was singing lead on 1996′ “That Thing You Do!” which peaked at #41.

With this release, Viola has employed violists Eric Summer and Kate Reddish (Get It? Mike Viola and the Violas!) to create stunningly beautiful arrangements of both new and previously released material. There’s something strangely beautiful about the sound of the viola – warmer than a violin, but still able to emit beautiful vibrant tones that are heartaching. The instrumental accompaniment adds a layer of complexity to Viola’s music that accentuates the subtle chord changes in his music.

But let’s not forget the real reasons for our worship of Mike Viola: It’s his clever songwriting and distinct 70s pop voice. He gives us an all-too-personal look at his psyche in “Primary Care Giver,” a song that is part confessional, part therapy. “How can I take care of myself if I don’t love myself?” he asks.

Side 2 (If you have the vinyl LP) consists mainly of previously released material, mostly from Electro De Perfecto. “Soundtrack of My Summer” sounds somewhat subdued without the pounding drums, but the ballad “Hair of the Dog” from his Just Before Dark LP will melt the coldest heart. It’s an earworm that I have yet to excise after three straight days. And it’s driving me crazy.

Acousto de Perfecto is mainly for Viola’s Secret Radio fans; those looking for an introduction to his music should start with one of his previous releases.  But those with a quiet disposition will appreciate his craft and the quiet, intimate atmosphere this album creates.

“I’m coming from a relaxed late-night place on Acousto de Perfecto, when the kids are asleep and you catch that second wind,” he recently told therockpit.net. “When Hüsker Dü is too loud and Syd Barrett is too angular and Leonard Cohen is a little too “get your read on.”

And we fans always appreciate a late-night encore.

And, to get rid of the earworm…