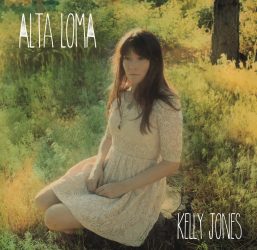 When Kelly Jones’ SheBANG! hit the streets in 2008, it was as if the sub-three minute pop song had returned in joyous fashion. Collaborating with pop genius Mike Viola, Jones recorded 10 undeniably catchy songs, each one holding a bit of charming 60s sunshine pop within its phrases.

Fans sensed a change coming in Jones’ songwriting with 2010’s Melon, a five-song EP recorded along with Viola. Sparse and intimate, it was a bit of SheBANG! Unplugged, but it was also a dismantling of the crafty pop production of its predecessor. They recorded it live, using analog tape, with no bells or whistles added.

The shift is complete on Alta Loma – a record that Jones says is her “Sunday morning album.” Recorded at her home with only a few instruments, it’s all Jones, whose voice and acoustic guitar are the main instruments. The record explores higher themes – love, life and spirituality – and reveals a deeper side of her.

Jones is definitely searching for something throughout the album – maybe it’s truth, maybe it’s love, maybe it’s God. “I’ve been wandering the wilderness / Covered in cosmic dust /Oh I can’t keep going on like this / Oh Lord it don’t take much / All I need is just one touch,” she sings on the album’s opener, “Right Hand Man.” She wants to “try to do what the Good Book says” in “Love Dynamo,” describing images of the sometimes rocky road to Paradise. She grows frustrated with “Unanswered Questions,” questions that seem to mock her as facts fall apart and she’s left wondering “Why?”

The melodies and pop song crafting are less apparent on Alta Loma – on SheBANG! they slapped you upside the head with instantly memorable hooks. But it’s clear with this record that Jones wants you to immerse yourself in each song, not let it shower over you quickly as the songs from SheBANG! did. She wants you to work for the meaning behind the songs. Inspired by little-known folk artist Judee Sill, who was known for her cosmic, quasi-spiritual imagery, Jones weaves complex tapestries that invite introspection, interpretation and reflection.

The hooks are there, though. “Right Hand Man” features descending chromatic notes, minor to major chord changes and effortless melodies that seemed to emanate from the lyrics. And “Love Dynamo” is a classic folk number that suggests James Taylor; the chords avoid the main key for most of the song, searching to resolve just as Jones does in her lyrics, until the end of the chorus, and all feels right.

One thing that is constant is Jones’ crystal-clear voice, which, due to the sparse production, rings true in every song and is at the forefront. You hear the heartache when she wants you to, and you feel the joy and peacefulness at just the right times.

Alta Loma is definitely a Sunday morning record. It’s a collection of tunes that should leave you thinking. And after a few listens, it will leave you humming as well.