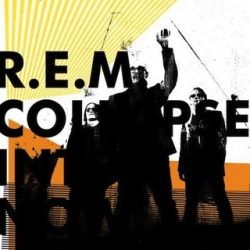 R.E.M. awoke three years ago after sleepwalking through the 2000s, releasing the energetic Accelerate. Most fans and critics, including myself, welcomed a return to the college-rock sound that propelled them to stardom in the 1980s. And fans had been hoping that it had ignited a new creative spark in the band.

Oh well. So much for hoping.

The band seems to have taken the critical success of Accelerate to heart too much, for their 15th studio album, Collapse Into Now, finds the band collapsing into the past. A lot. It’s an album of retreads, rewrites of older R.E.M. songs that wears thin very quickly.

Choose almost any cut from the album, and you’ll find yourself comparing it to a previous R.E.M. song. The opener, “Discoverer?” Oh wait, that’s “Turn You Inside Out” with a little bit of “What’s the Frequency, Kenneth?” thrown in.  “Überlin?” That’s easy: “Drive,” with lead singer Michael Stipe simply replacing the “Hey…kids” line with “Hey…now.” “It Happened Today?” “World Leader Pretend,” until you hear the line, “Hip, hip hooray,” and you suddenly remember that same line was uttered during 1994’s “I Don’t Sleep, I Dream.”

There are a few nuggets of originality. “That Someone Is You” is energetic and melodic, recalling the best of Accelerate, but it’s only 1 minute and 45 seconds long. And the charming “Every Day is Yours to Win” sounds like a lost cut from Up, arguably R.E.M.’s most ethereal and experimental albums from the last decade. Surprisingly, it’s the farthest one can get from Accelerate, with very little drums and a simple arpeggio from guitarist Bill Berry.

I don’t know whether it’s sloppiness, or whether after 15 albums and 150 songs, you’re bound to repeat lines and melodies. I still wonder whether the soul of the band was Bill Berry, whose departure in 1997 marked the beginning of R.E.M.’s slump. But it’s as if after 30 years, the band simply has run out of ideas. And lyrics. And music.