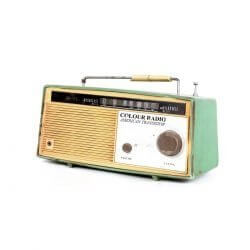 Waiting for a release by Steve Eggers and the Nines is like waiting for Christmas – you wonder what goodies are going to be waiting for you when you open the presents. For this Canadian group, it’s not whether they will deliver on a good album, or whether Eggers still has enough melodies up his sleeve, but what grand new things he has in store for us.

On Colour Radio, he and the group do it once again. The album is jam-packed with unforgettable hooks and ethereal harmonies; in fact, it may be the most consistent Nines album to date, and that’s saying something.

Colour Radio  is almost a concept album; it begins with the old-time radio tuning that we used to do with the knob, trying to find that perfect radio station among the static, and then we find the right station – the group launches into “Crazy Little Girl,” a rocker that features an aggressive Eggers on vocals before ELO-type vocals emerge on the chorus.

The theme continues throughout the album. There’s a commercial break for “Hercules Cologne,” and even a station jingle as the wonder station – a station that plays all Nines music? – counts down to the number nine song of the week.

Eggers gets funky on a few songs – something we really haven’t seen from him. It’s an interesting departure for him; don’t expect ELO on any of these tunes. But it’s the ballads and mid-tempo numbers where Eggers has always excelled, and he doesn’t disappoint. “Maybe if You Stayed” made me nod my head and say, “There’s the Steve Eggers I always want to hear.” It’s genuine ear candy.

Eggers has some secret formula for writing pop music and is blessed with an ear for what goes well together. “For A Lifetime” has that old feel to it, similar to his songs “Vanessa” and “Plans That Never Came to Pass”; it’s accented with strings and makes for a perfect lullaby.

And like a true radio countdown, Eggers saves the best for last. “I’m Lucky” is pure McCartney; it’s a beautiful piano ballad that becomes an instant Nines classic. It’s definitely the number one song on the album – and on the radio station.

It’s Christmas time, and Eggers, like Santa, even gives us a Christmas song as an epilogue to the album. Colour Radio is a wonderful Christmas present indeed.