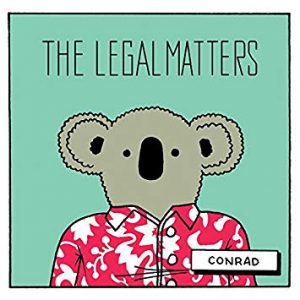 I hate when bands I love “evolve” – i.e., go in a completely different musical direction.

When R.E.M. went all grunge on us with Monster, I despised it. When U2 embraced techno – even starting with Achtung Baby, I grimaced. When Creed started using the theremin, I rebelled. (Ok, I made up that last one. I have no idea of knowing whether Creed ever used a theremin. Promise.) I probably would have thrown eggs at Bob Dylan during his electric set at the Newport Folk Festival.

I like bands for a reason, and it’s their music. So it’s good to see that with their second release, Conrad, The Legal Matters continue to make songs that are hugely listenable, melodic and pleasing to the ear.

The album starts with a bang with “Anything,” which features three-part harmonies on a memorable chorus. It’s almost as infectious as “The Legend of Walter Wright,” their superb cut from their first, self-titled album.

“I feel the warmth of the sun,” sings Chris Richards, borrowing from the Beach Boys in “Minor Key,” which incidentally, is not in a minor key. It has a Gigolo Aunts-vibe – a power-pop version of the Beach Boys.

If anything, Conrad rocks a little more, with fewer mid-tempo numbers and more guitar brought to the forefront. It’s also bolder and more assured than their first release; they’ve focused their sound and polished their songwriting. The result is a confident, self-assured record that still has something for everyone.

“Pull My String” is straight from a time machine, sounding like an AM hit from the 1970s. “She Called to Say” is accented with power chords, a Beatlesque bridge and an uplifting outro that features a unique chord progression – it’s brilliant. And you wish “Lull and Bye” were longer than a minute 10 seconds, with its achingly beautiful harmonies.

The Legal Matters have proven that there is no such thing as a sophomore slump. Conrad is sublime listening, each cut its own jewel with something wonderful to be discovered. And not a theremin in sight.