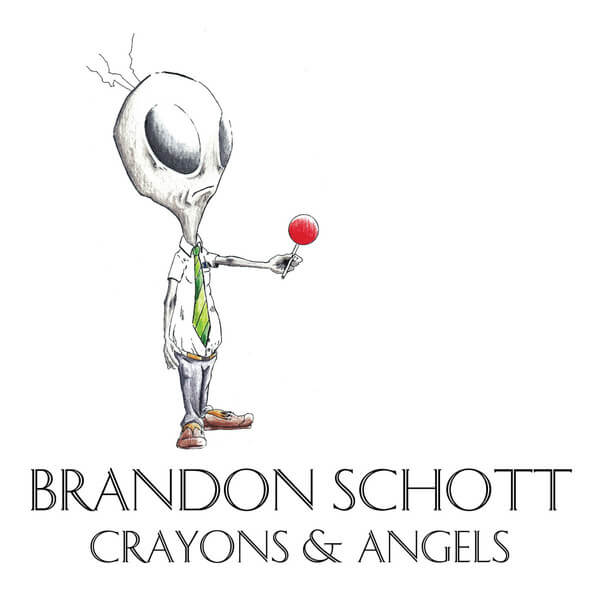 “Let’s get lost in the sound,” says Brandon Schott in his track “Verdugo Park” from Crayons & Angels, his fifth album. And it’s a wonderful wall of sound that Schott creates, a soundscape of instruments creating magnificent stories that hearken to an innocent, playful time. (Read my interview with Schott)

Schott’s day job is in the music business. A graduate of the Berklee College of Music, he obviously knows his way around musical instruments, and he brings it all out in the opening montage, “Dandelion” (the title of his first album after being diagnosed with cancer). He uses a Rhodes piano, toy piano, dulcitone, and some backwards/sonic trickery to create the mood for the entire album, which is a wonderfully imagined group of songs that remind you of yes, Sergeant Pepper.

“Dandelion” transitions nicely to “Henry,” a playful tune written for some friends who recently had their first child. “Henry, the world is waiting for you / And we can’t wait to get to know you / with a heart that’s poised to make some noise / oh Henry, you’re on your way,” he proclaims. The song is full of hope and joy, with trumpets that sound like “Penny Lane”-era Beatles. You can already tell I’m falling in love with this album.

It’s not all Schott on this album. He teams with another fave, Kelly Jones, on the Judee Sill-sounding “Every Little Song”. The slide guitars are reminiscent of Jones’ recent alt-country work, and her voice lends perfect harmonies to Schott’s melodic voice. Schott then borrows from Elvis Costello’s catalogue, covering “Riot Act” in a version that while heavier than the other pieces, still has that melodic feel that tugs at you incessantly.

Schott’s other collaboration is with none other than singer-songwriter Nick Heyward (remember Haircut 100?). The duet, “A Better Version of Me,” returns to the playful, pop tunes of the beginning of the album, and it’s not unlike Heyward’s solo material.

Not everything on the album is dandelions and butterflies. “Slow Down” is a somber but beautiful ballad that reminds us not to hurry through life. And “Wisteria” is a powerful instrumental; like the plant, it starts small and quickly builds in intensity and instruments, covering you with hope and emotion.

Although Schott won’t admit to Crayons & Angels being a concept album, it certainly plays like one, or at least a soundtrack to a Broadway musical. There are several themes running through the albums, and two songs (“Dandelion” and “Verdugo Park”) reappear as reprises later in the album. And Schott throws everything but the kitchen sink at the recorders: additional percussion, ukeleles, tablas (yes, I had to look some of these up), bells, reed organs — Each instrument adds its own signature to the song it’s featured on.

The sequencing on Crayons & Angels is supposed to correspond to sides on a vinyl album, so I suppose this is the best way to listen to the album. But listening straight through on my PC is a pleasure in and of itself; it’s one of the few albums I own that doesn’t have any filler, any stinker that makes you want to delete it or skip over it.

Simply put, Schott has created a masterpiece here, something that reminds you of an earlier time but gives you hope for the future. Given Schott’s life over the past 15 years, he has plenty of ups and downs that give him the motivation to move on, remember the good times, and carry the bad times as experience. That’s what life is about, and Crayons & Angels could be the soundtrack to that life.