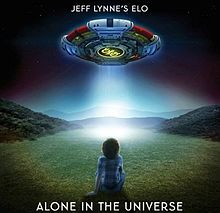 By now, we know what to expect of Jeff Lynne: airless thudding snare drums, immaculate production, gorgeous chord progressions and a chorus of harmonies. It’s been his trademark for the last 40 years, dating back to the glory years of the Electric Light Orchestra in the 1970s.

Now it’s just Jeff Lynne’s ELO (and let’s be honest: was it anyone else’s ELO?), and instead of having a 20-piece orchestra, he’s doing almost everything himself. And it sounds like it: On the group’s new album, Alone in the Universe, gone are the sweeping cellos and basses that were the group’s trademark sound, and there are only hints of synthesizers – mainly on the title cut.

This is ELO in the style of the Beatles and the Traveling Wilburys – acoustic guitars, the aforementioned snare drum pacing the songs, with an occasional hint of the Electric Light Orchestra that was.

And it’s a damn fine album.

The opener, “When I Was a Boy,” is a wistful ballad in the style of “Real Love,” the Beatles single that he produced during the 1995 Anthology. And although the orchestral touches are few and far between, you can still hear hints of the old ELO and the Traveling Wilburys: “Ain’t it a Drag” sounds like an updated “Calling America,” only better, with Lynne doing his best Dylan imitation.

He channels his best Roy Orbison in “I’m Leaving You,” and the result is chilling. But if you want true, 70s-style ELO, look no further than “One Step at a Time.” The disco-tinged rocker, not unlike “Evil Woman,” features the falsetto choruses that we came to expect from every ELO number during that era.

And each song has its hook. For Lynne, it’s a formula, a tinge of Beatles (especially the late George Harrison), major-to-minor chord changes, and tunes that last less than three minutes. But the formula works. Why mess with it?

By the closing number, “Alone in the Universe,” you know you’ve heard an ELO album – the first in 14 years – but you know with Lynne’s growing maturity it’s really his third solo album. Either way, it’s worth listening to over and over.

1 thought on “Alone in the Universe – Jeff Lynne’s ELO”