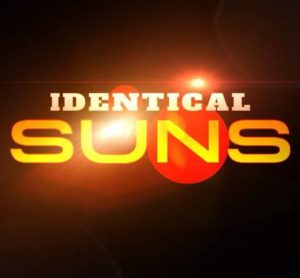 The Internet is an amazing thing. It’s created pen pals, marriages, business dealings, debates and in the case of Identical Suns, a songwriting collaboration.

Rene Rodriguez and Todd Stanton were acquaintances in the Mike Viola Facebook group. The two discovered that they both had a passion for songwriting and began writing, first via old-school technology – Stanton sent Rodriguez a phone recording of a song. Rodriguez wrote lyrics to it, recorded a new version, and emailed it back to Stanton, and the songwriting process was born. (Read my interview with Rodriguez and Stanton.)

The result is an eponymous debut by the duo, who are the core of the group Identical Suns. Possessing voices that sound like the Smithereens’ Pat DiNizio and Matthew Sweet, both Stanton and Rodriguez share lead vocal duty on the 10 songs, which are marvelously crafted pop gems that will keep you humming long after the CD has stopped playing. The opener, “Baby I’m Down,” hooks you with a nice chromatic chord progression in the refrain, and “Show Me a Sign” has a memorable descending bass line played with an electronic keyboard.

What Rodriguez and Stanton have done (with the help of Stanton’s family and drummer Mitch Trompeter) is nothing short of amazing. They’ve created a cohesive album that is mixed like the two were in the same studio the whole time – even though they recorded their parts some 2,000 miles away from each other. “The Turn” is a 21st-century version of the Beatles’ “A Day in the Life,” with a mini-suite of song snippets. And “After the Lullaby” is a charming, majestic acoustic ballad that ends the album perfectly.

Let’s hope that this isn’t a one-time collaboration and those emails will keep traveling back and forth, clogging the Internet with more delicious pop music.