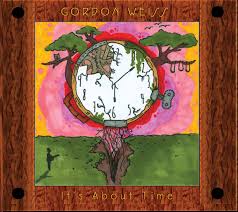 When I double clicked the first track from Gordon Weiss’ “It’s About Time” (I don’t “put the needle down” on the record or press “Play” on my CD player anymore; it’s all computers), I was expecting a power pop compendium, given Weiss’ presence in various power pop groups on Facebook.

Was I surprised. What greeted me was a complex but thoroughly delightful assortment of songs full of varied instrumentation, moods and genres.

At its heart, “It’s About Time” is a complex, acoustic-based record, with flourishes of pop, rock and AM radio rock – think of it as Duncan Sheik meets Elton John (that’s a good thing). The opening track, “The Ugly Inside,” is a basic rock number that sounds like your favorite 70s rock icon, with brass accenting the verses, but the constant switch from major to minor key in both the verses and chorus stick in your memory. Something’s familiar here, but it’s just different enough to register pleasure.

“I’m Your Fan” begins with an acoustic guitar and is about an obsessed fan whose object doesn’t know he exists. It’s a sweet number, getting across the hopefulness of the fan while underlining the impossibility that the two will truly be anything but acquaintances at best.

“Will you play the muse when I no longer amuse you?” Weiss asks in “Saccharin, Aspartame, Splenda, You & Me”. With a title like that, you’d expect it to be all syrupy and poppy, but it’s a soft acoustic number about someone who is starved for another’s affection. It’s soothing and sad at the same time. “Sticky Thoughts” reprises “The Ugly Inside”‘s major-to-minor chord changes in the verses and choruses, only this time it’s in a ballad, and the effect is more heartache than joy.

As the album progresses, it gets grander in scope. “Thanks I Get” starts out slow, features 70s-style synthesizers reminscent of Styx, and before you know it, it’s a rocker. “Spinning ’round” begins with a piano and sounds like an old forgotten Elton John classic. It’s simply beautiful; if you’re looking for the perfect pop song on this album, you’ve found it. By the final number, “My Love Still Grows,” you relax as the acoustic guitar plays out the most serene ballad on the album.

You get a lot more than you expect with “It’s About Time.” Each track is different, so it doesn’t get old with repeated listenings; each time you hear something new, and that’s a sign of an album that will stay in your rotation for a long time.