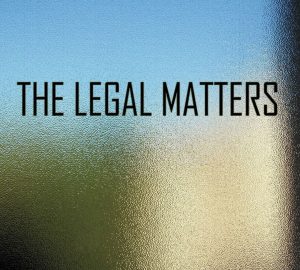 In a way, this review is not fair, for in my description of the songs of Andy Reed, Keith Klingensmith and Chris Richards – i.e., The Legal Matters – I could easily evoke the name of practically every influential power pop artist.

This is not to say that the songs on the group’s self-titled debut are derivative; instead, each song is so instantly accessible you swear you must have heard it before, and you find yourself searching your internal power pop catalog for the right reference.

And sometimes, the influences are apparent; the intro to “Stubborn” sounds like “Girlfriend”-era Matthew Sweet; the opening cut, “Rite of Spring,” oozes of Beach Boys harmonies. And “Have You Changed Your Mind” sounds like a Gigolo Aunts outtake.

But that’s okay. All pop music is derivative. What The Legal Matters have done is recognize the recipe for a great power pop song: Take an inventive set of chords, sing a hummable melody over it, and layer it with harmonies. Lather, rinse, repeat.

No more is this apparent than on “The Legend of Walter Wright,” an upbeat song complete with ooh la la’s and classic pop chord progressions; but four songs into the album, you recognize this song not as a Who song, or a Posies tune, or a Big Star melody: It’s The Legal Matters making their own recipe, and it’s sheer pop perfection, one that will leave you singing it hours after you’ve heard it.

From then on, the influences move to the background, and all you hear is sublime pop music. “Mary Anne” is a nicely textured ballad with the signature harmonies lacing the chorus. “Before You Get It Right” is downright infectious, starting in a minor key but moving quickly to a major key  (What great pop song stays in a minor key for a really long time? Okay, “Eleanor Rigby”.) and featuring a nice little guitar lick repeating the same note over and over, which complements the changing bass line.

In fact, in no time, the 10-song album is done, and you’re left wanting more derivations, more Raspberries, more Badfinger. The Legal Matters have found their own voice by finding and tweaking the best of the best power pop artists, and I can’t wait to digest another meal from them.