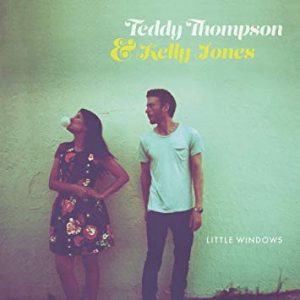 Ever since 2008’s SheBANG, Kelly Jones has moved more and more away from pop music and toward a more folk, acoustic sound. Her EP Alta Loma was an acoustic-guitar oriented release, with just a few hooks but thought-provoking lyrics. With Little Windows, her collaboration with Richard and Linda Thompson’s son, Teddy, she brings the transition full-circle with a downright country album that evokes the sounds of Porter Wagoner and Dolly Parton. Or think of the more country-twinged tracks from She & Him.

I was a little hesitant to hear the revised Kelly Jones – SheBANG is one of my all-time favorite albums – but the album is a short but enjoyable trip through old-time country music. At times plaintive, at times jaunty and raise-your-skirt honky-tonk boogie, it’s enjoyable, if not what you’d expect. Jones mainly sings harmonies to Thompson’s heartfelt voice, which brings to mind Dwight Yoakam at times.

That doesn’t mean that there are touches of pop music in this release. The lead single and opening track, “Never Knew You Loved Me Too” contains piano and hand claps amid the Patsy-Cline like melody. “Wondering” contains a skiffle beat with a gorgeous melody that is instantly hummable. And “Don’t Remind Me” is a dreamy slow song that could have belonged on the Twin Peaks soundtrack – beautiful yet hypnotic.

Clocking in at just under 26 minutes, Little Windows is a perfect homage to the sounds of early country music, with its own modern touches. It’s an anomaly in this cookie-cutter age of the 2000s, and it helps us remember what country music was all about at one time. Jones and Thompson’s voices blend well together, leading us to wonder if there is more collaboration in the future. But first, let’s hear SheBANG II. (hint, hint…)