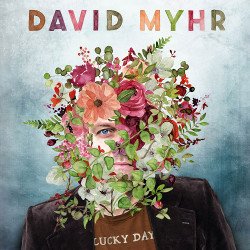 Let’s set one thing straight from the beginning: Former Merrymaker David Myhr is the best songwriter to come out of Sweden since ABBA. Forget the Cardigans, Lykke Li, Peter Bjorn and John, Europe, Roxette, Ace of Base (Please forget the last three). His songs are carefully crafted with sing-song melodies, inventive key changes and Beatlesque chord progressions.

In fact, he’s so good at it he actually conducted an academic research project on songwriting, answering questions such as, where do musical ideas come from? How do songwriters compose their melodies? Why is one idea more appealing than the other? Fundamentally, what makes a great song?

His first solo album, Soundshine, was absolutely sublime and could have been part of his research. Filled with hooks and lovely melodies, it was the highlight of 2012.

It’s taken six years for Myhr to craft his followup album, Lucky Day. He’s given us a few teasers to tide us over during the break – an EP and a few singles – but this is his first full release since Soundshine.

For Lucky Day, Myhr has taken a different approach, collaborating with other pop singer-songwriters such as Bleu, Young Hines, Linus of Hollywood, Bill Demain and Brad Jones (who produced the album). Much of the album was written and recorded in Nashville, and it shows. Acoustic guitars, pedal steel guitars, harmonicas and mandolins grace many of the songs; in fact, my mother said one song sounded like Glen Campbell.

The approach and recording have given Myhr a different dimension. “My goal was to show David branching out from youthful power-pop to a more reflective, and more lasting sound,” said Brad Jones. And it works. The songs are a little harder to get in your head, but once they do, they’re more treasured and appreciated. The upbeat, pop songs that we’re used to getting from Myhr have been replaced by laid-back, acoustic-driven numbers.

Myhr knows how to write a pop song, and his collaborators do as well; this is apparent on the first single, “Jealous Sun,” co-written with Bleu. It’s a George Harrison/Traveling Wilburys-sounding song that actually finds its beginnings in 2011, when he was recording at Abbey Road Studios. The song features key changes around every corner – sometimes when you least expect it. In fact, toward the end of the song, he throws two key changes within three measures, and it works beautifully.

“My Negative Friend,” co-written with Young Hines, is a rolling, rollicking song that chugs along until pianos and kazoos give it a playful vibe. “Room to Grow” starts in a minor key but modulates to a major key – perhaps another songwriting trick that Myhr has learned in his studies. And “The Only Thing I Really Need Is You” is a heartwarming acoustic ballad that finds Myhr at his most personal.

But in spite of all the songwriting help Myhr gets, he’s best when writes by himself. And “The Perfect Place” is proof of that. A lone guitar begins the song accompanied by a descending bass line – again, another Beatlesque trick – and a key change marks the chorus, which ends in a brilliant drum buildup that transforms the song into a majestic mid-tempo ballad. “The perfect place for me is any place where I can be with you / The perfect thing to do is anything as long as we’d be two,” he sings. It’s a touching love song.

I’ve been picking Myhr’s brain for years trying to find the answer to what makes the perfect pop song. With Lucky Day, he shows us what good songwriting is – with or without help from others. At one point during a listening session, my father said of one song, “I like that. You can actually hum it.” Again, another clue. I will figure you out, David Myhr. I will.