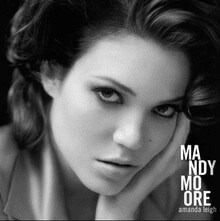 The evolution of Mandy Moore is now complete. Now 25, the former teen pop sensation has recently gotten married, and her latest album, Amanda Leigh, is a collection of smart, acoustic- and piano-based pop songs that, based on similar artists’ work, should flop phenomenally.

Moore has aligned herself with one of the best (and unknown) songwriters in pop music — former Candy Butchers frontman Mike Viola. The resulting work is melodic and complex — something that most of the buying public just doesn’t get. Stunning works from some of the industry’s best songwriters have failed to capture a large following – Jellyfish, Pernice Brothers, Owsley, Aimee Mann, and Sam Phillips being among the victims.

The opening track, “Merrimac River,” shows the sophistication – a waltz with acoustic guitars, breezy strings and Moore’s soft voice blending nicely with Viola’s backup vocals. “Ferndell” is an uptempo minor-key number that still features mostly piano and acoustic guitar; the bridge is reminiscent of some James Bond theme song, as the acoustic guitar shimmies up the scale, only to be replaced by a baritone saxophone and vocal “ba -bah”‘s coming back down the scale. It’s truly bizarre, but catchy nonetheless.

The whimsical nature continues throughout the album; “Pocket Philosopher” is a Tin-Pan-Alley homage with a toy piano; you expect a bird to land on Moore’s finger as she sings. Viola seems to get every instrument out of his closet, as the album features pedal steel, violas, clavinets, flutes, bass clarinets, melodicas, harpsichords, French horns and fiddles.

At times, the music gets almost too sophisticated. The complexity of the songs and the arrangements is such that the music, although pleasing, is not infectious. It takes four or five listens before you begin to recognize each song. That being said, there’s not a bad apple in the barrel, the worst track being “Everblue” (the only one on which Viola did not collaborate, interestingly enough).

It is not hard to recognize the first single, “I Could Break Your Heart Any Day of the Week.” It’s a welcome distraction – classic bubblegum complete with hand claps; if the buying public has any sense, it should be the hit of the summer. “Love to Love Me Back” is classic Mike Viola, an instantly catchy mid-tempo number with three-part harmony.

Much has been made of the quality of Moore’s voice, with critics citing overproduction that frequently masked her weak vocals. And sometimes, her higher register can sound airy; too many catches in her voice sound contrived. But for the most part, her voice is spot-on, earnest, true and perfect for the album. Nowhere is that more apparent than on the final cut, “Bug,” a solo acoustic epitaph that is plain and simple.

I welcome Mandy Moore to the real pop world. And for the sake of pop music, I hope she succeeds, or at least puts out a few more jewels before her record label drops her. </cynicism>