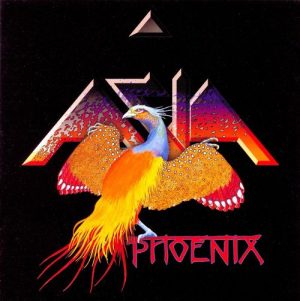 I should have known by judging from the title of Asia’s latest effort, Phoenix, that it was going to be bad. After all, it doesn’t follow the band’s tendency to name their studio albums with short, one-name titles that begin and end with the letter A (Asia, Alpha, Astra, Aqua, Aria, Arena and Aura – all but Silent Nation). That’s like naming your kids Harry, Larry, Gary and Steve.

But at least they have the familiar Asia logo on the cover of their album, as well as the typical airbrushed T-shirt scene featuring mythical or sci-fi creatures (this time it’s a Phoenix – duh). And everything else about the supergroup is the same as it was 25 years ago – same lineup, same prog-rock tendencies, same instruments and same tired formula.

There’s really very little here that merits attention, except for the fact that they’ve managed to resurrect every one of their hits on this album, albeit with different lyrics. “Never Again” recalls “Heat of the Moment,” “Nothing is Forever” is a remake of “Only Time Will Tell,” and the ballad “Heroine” is “The Smile has Left Your Eyes.”

Too bad the lyrics didn’t get any better; in fact, they have probably gotten worse. “The age of Gemini, a dazzling creation/ A new enlightenment, a great illumination,” they quoth in “Never Again.” Huh? Then on “Orchard of Mines,” there’s this gem (no pun intended): “Would you look now unto the pit of me on the ground / And you wander through these to climb these grapevines.” Yuck! Sounds like a seventh-grade amateur poet (with apologies to seventh-grade poets).

What’s ironic is that had Phoenix come out 25 years ago, I may have liked it. I was a big fan of Asia’s first two albums. But while my tastes have changed, Asia’s sound has not. It’s like going to a high school reunion and seeing that the class clown, now overweight and balding, still uses joy buzzers and makes noises with his armpit. You just don’t want to hear it anymore.