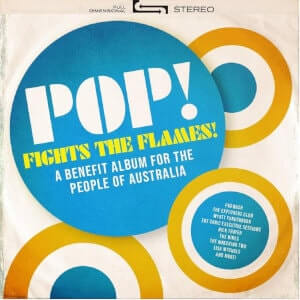 The fires in Australia have been so devastating, so world-changing, that they demand our attention. Scenes of burned animals being taken for treatment, watching the flames burn out of control has made us all weep for the land down under.

As with most tragedies — hunger, Hurricane Katrina, tsunamis, Darfur — music is always ready to help, to do all it can to soften the blow that both people and Mother Nature hurl at us. The first example that I know of is George Harrison’s Concert for Bangladesh in 1971. Its concert, film and soundtrack raised millions for the people of that country.

Now, pop musicians have risen up and done the same thing for the Australian bushfires. Titled Pop! Fights the Flames, the resulting album may not nearly as many copies as We Are the World or Hope for Haiti Now, but it’s the finest group of songs I’ve ever heard on a benefit record.

Instead of cajoling singer-songwriters to write something for the fires, Ash Wells of Goldstar Recordings has amassed some unreleased (and some released) songs by 34 power pop musicians. And many of these musicians don’t hold back with their offerings.

Take, for instance, Timmy Sean’s “Come on Mandy.” It’s a vintage power-pop sound with a memorable hook that stands heads and shoulders above anything on the radio right now. Chris Price continues his good pop fortunes with a wonderful Nilsson-esque piano blues ballad, “Cozy.” And Steve Eggers of the Nines shows that like McCartney, he can give away jewels that rival anything he’s released on his own. You can almost see him churning out the charming “She Is Waiting” in an hour or two, putting a bow on it, and sending it to Wells. It’s perfect.

The deeper you go, the more surprises there are. The Explorers Club have now channeled the Zombies in their latest incarnation with “Priscilla,” and Wyatt Funderburk takes some time off from the group to create the lush, harmony-laden “Poinciana.” Will Courtney tears the heartstrings out of us with an emotional acoustic ballad, “Hard Time.” And The Last Bees go all Beatlesque on us with “Can’t Wait,” complete with close harmonies and handclaps.

Other more familiar songs only add to the pop goodness of the album. David Myhr redoes my wife’s and my song, “The Perfect Place” from his album Lucky Day and brings the strings to the front. The Sonic Executive Sessions melts your heart with “Fly Far From Here,” a piano ballad from the 2011 eponymous LP, and it makes me hope that more music is coming from Christian Phillips in the near future. And my most recent obsession, Famous Groupies, contribute their most McCartney-esque ditty, “Be There My Love,” forcing me to sing it the rest of the day.

I’ll be honest: I’ve never heard of some of the musicians assembled for this project, but that doesn’t make their contributions any less significant. It shows the sheer depth and talent that exists in the “power pop” industry, for lack of a better phrase.

And Wells has done a superb job of bringing them all together to showcase their talents. Their goal with the digital-only LP is to sell just 3,000 downloads. It’s not much, but it will do wonders for the people of Australia. Go buy Pop! Fights the Flames now, feel good about what you did, and feel even better after listening to this collection of pop goodness.