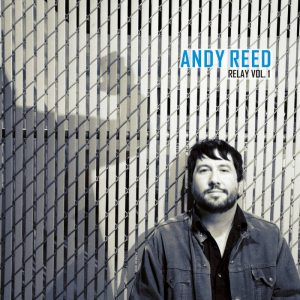 “Daddy, this CD has only five songs on it,” my daughter exclaimed as I tore open the packaging to Andy Reed’s latest release, an EP entitled “Relay V. 1.”

That may be the only disappointing note to Reed’s release, a small collection of songs on what is likely to be the first of two EPs that he will release, the next one coming in the spring. “I am never happy just doing the same thing over and over again, so I thought I’d do it this way from now on,” Reed said in an interview. A vinyl album featuring both EPs is expected to coincide with the release of the second EP.

It’s clear from the EP that Reed has great respect for the Beach Boys; the first two tracks are titled “Waves” and “Dreaming of the West Coast.” But aside from the gorgeous harmonies that appear on every track, that’s where the similarity ends. Andy Reed grew up on AM radio, and his songs reflect the uplifting sound and guitar-heavy sound of the 1970s. Nowhere is this more apparent than “Darlin’ You Don’t Know,” which I would have expected to hear sandwiched between “The Things We Do for Love” and “Lonely Boy” when I was 11. It’s pop perfection.

“Waves” begins quietly, as if it were low tide, but continues to build in both vocal structure and instrumentation. “Dreaming of the West Coast” sounds like a lost Gigolo Aunts track, its easy acoustic backing accentuated by Reed’s distinct pop voice. “Love is Gone” is a somber ballad that brings to mind Simon and Garfunkel.

Perhaps the biggest surprise is Reed’s cover of Sloan’s “I Love a Long Goodbye,” a song he recorded for a Sloan tribute album (and I must admit I had never heard before). Reed surpasses Sloan’s version with superior harmonies, and the song feels more urgent and heartfelt with its more subdued percussion bringing out the bittersweet chord progressions. “It fit so well with what I was doing for this EP that I decided to put it on here,” Reed said. “It has always been one of my favorites, and I’m really glad it turned out the way it did.”

As with any great EP, the only mark against “Relay V.1” is that it ends too quickly; EPs are supposed to give you a taste of what the artist is about, what he or she can do, and whet your appetite for more. Reed’s chops for creating sublime pop songs are so pleasing that you expect it to go on and on, and you want more right then and now. Luckily, Reed released an album of outtakes and rarities in September, so we have more material to listen to. And we won’t have to wait too long for another EP and get another taste of this artist’s amazing talent.