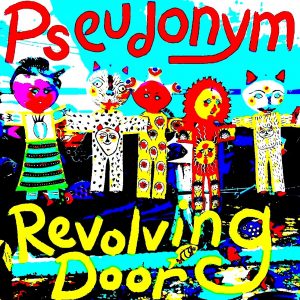 Pseudonym’s Revolving Door found its way into my inbox several months ago, where it gestated quietly before I got around to listening to it. What I found when I finally put my headphones on and pressed play was one of the biggest surprises of 2015 – a low-fi, extremely melodic release by a singer-songwriter who has been hiding his light under a bushel for too long.

Paul Desjarlais is the genius behind Pseudonym, which, of course, is a pseudonym for his fake band and his fake bandmates, who even have their own fake bio. It’s an outlet for Desjarlais, who hasn’t released an album of new material in 17 years. And you can tell that he’s been saving up – 16 tracks that range from garage rock to baroque pop – it’s as if Robert Pollard from Guided by Voices took some Xanax.

Desjarlais, whose voice sounds a lot like Bill Ricchini, has a soft delivery on many of the songs. “Art School Lady” opens the album – a rolling, guitar-driven number that is calmed only by Desjarlais’ soothing voice. Keyboards add texture to the song, and the result is simply sublime. “Long Goodbyes” repeats the formula, but the guitars sound more like chimes, and it’s a much calmer, beautiful song.

Even on more of the heavier songs, Desjarlais tends to restrain himself oh so slightly as to not let the song get away from him. I’m reminded of Poole, whose warm, upbeat songs made you want to dance and meditate at the same time. He has a knack for a melody and a chord progression that brings a smile to your face. His cover of Simon & Garfunkel’s “The Only Living Boy in New York” leaves you nodding your head as to his influences; it’s as if Simon has picked up an electric guitar and added some testosterone to his folk songs. He’s also a man of a thousand genres; some have you gazing at your shoes with their Slowdive/Jesus and Mary Chain guitars. Others have a new-wave kick, and “Elevator” has a hook so prominent that it had my 10-year-old kicking around the house, dancing from the first play.

A sign of a good album is that it doesn’t have to grow on you. Revolving Door takes you by the cranium, inserts its proboscis into your brain, and fills it full of unforgettable melodies that leave you wondering where this guy has been for 17 years – and whether we’ll have to wait as long for a follow-up.