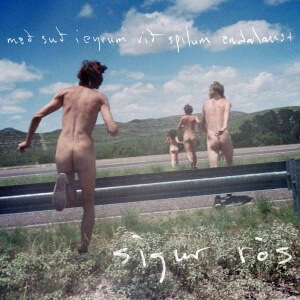 During the past few years, Sigur Ros has been in its cocoon, biding its time and slowly waiting for some metamorphosis to occur. And with their new release, Med Sud I Eyrum Vid Spilum Endalaust (which in English means “With a Buzz in our Ears We Play Endlessly”), they have emerged with a glorious new sound that may alienate long-term fans but exposes the band to a whole new audience.

From the opening track, “Gobbledigook,” the change is apparent – acoustic guitars and a quick pounding drum are now the backdrop for Birgisson’s vocals. The group gets downright poppy with “Inní Mér Syngur Vitleysingur,” with a chiming piano keeping time with the percussion as Birgisson drops his voice an octave. They sound like – dare I say it? – Coldplay.

The album is not without its flashbacks – “Festival” hearkens to their more dream-pop roots, as does the simple, touching finale “All Alright” (their first song with English lyrics) – but it is by far their most accessible. Most songs are sung in Icelandic, but when sung at a glacial pace, with syllables spanning several measures – it’s probably still indecipherable to their fellow citizens. They also use words from their own made-up language, “Hopelandic,” which allows the music to take center stage.

Sigur Ros has mastered the art of setting a mood with not so much melody and harmony, but from their basic elements – pitch, dynamics and timbre. Now, by applying their craft to familiar pop/rock components – tempo, meter, guitar/drum combinations – they have created something special: familiar-sounding music that evokes the emotion of their older material.

It’s the perfect blend of the old Sigur Ros and the new Sigur Ros – one in which everyone should be satisfied.