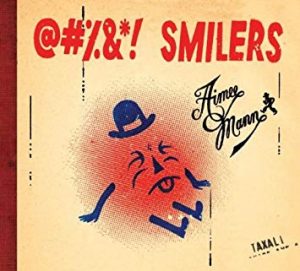 For years, Aimee Mann has tried to shed her image as the girl with the New-Wave haircut who sang the 1980s smash “Voices Carry.” Since 1993’s solo debut Whatever, the former lead singer for ’til tuesday has gradually grown a fan base, thanks to her soundtrack to the film Magnolia (which earned her an Oscar nod) and her decision to shun the record labels and go independent.

I have been a big fan of Aimee Mann, naming Whatever one of my Desert Island Discs. This early material found Mann jaded and feisty from previous failed relationships, and as a result, her music and lyrics were sharp, with melodic hooks and charming harmonies set to up-tempo numbers. Her ballads were surprisingly vulnerable, revealing a layer of fragility that is personal and almost childlike.

But as Mann has grown older, the old wounds have healed and she has grown stronger and more confident. She has found happiness with her husband and fellow singer-songwriter Michael Penn, and this contentment has seeped over to her music. And the last few discs have seemed somewhat plodding and middle-of-the-road.

At first, her newest album, @#%&*! Smilers, seems to be a return to the sharpness of Whatever and her follow-up, I’m With Stupid. “Freeway” begins with a distorted bassline riff, and the up-tempo number is a refreshing start. The second track, “Stranger into Starman,” is a beautiful piano ballad that recalls an old Bacharach classic, but at 90 seconds, it’s way too short.

Then the album gets muddy. For the past few albums, Mann has relied on a formula of 3/4 time signatures and jazzy, syncopated rhythms played at mid-tempo. It’s when Mann relies on this familiar vaudevillian formula that Smilers becomes forgettable. Gone are the rich harmonies that accented Whatever. And just when you think that she’s doing something different – horns and strings, or an unusual chord progression – she falls back into the middle of the road.

The problem may lie with the departure of Jon Brion, who produced her first few albums and co-wrote many of the songs. Ever since Mann stopped collaborating with the eclectic composer of the Magnolia and Eternal Sunshine of the Spotless Mind scores, the wit and originality has been lacking. The tunes are no longer whimsical, but predictable.

“I don’t want anything anyway / I was happy with what I had yesterday,” sings Mann on the repetitive “Borrowing Time.” Unfortunately, I was happier with her songs of yesterday.