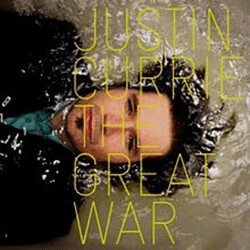 For more than 15 years, Justin Currie was Del Amitri, writing most of the band’s more popular songs (“Roll to Me,” “Always the Last to Know”)  and being the front man. So it should come as no surprise that The Great War, his latest solo effort, sounds like a lost Del Amitri album.

Well actually, it should come as a surprise. His first solo album, Rebound, was disappointingly dull and lifeless; missing was the upbeat, melodic songs that made Del Amitri a modest success during the late 1980s and early 1990s. He even admitted on his MySpace page that the album “features eleven thunderously dreary dirges many of which he is currently airing live to pained looking crowds of people in dingy Glasgow basements.”

He has definitely fixed that problem. The opening track, “A Man With Nothing To Do,” is fresh, upbeat and cheerful – vintage Del Amitri. Some may say that’s a bad thing; after all, hasn’t he done that before? Well yes, but he does it so well. Some are masters at harmony, some have mastered the art of chord progression. Currie is a master of melody. His phrases seem to run along effortlessly, and you swear you’ve heard them before but never can seem to put your finger on it.

Currie’s ballads are sublime, tugging at your heartstrings with beautiful music while offering little solace in the lyrics. The most touching of the album bears the doleful title “You’ll Always Walk Alone,” in which Currie laments, “When you’re swooning at the sinking sun with that special girl you string along…Remember you’ll always walk alone.”

In fact, Currie’s songs always seem to be bittersweet; with titles such as “Anywhere I’m Away From You,” “Can’t Let Go of Her Now,” and “As Long As You Don’t Come Back,” he seems wrecked, even bitter. But the lyrics are lost in the midst of the maddeningly catchy music. It’s only when you listen closely that you hear the despair in some of his songs, and at that point, you don’t care.

Listening to Justin Currie and his The Great War is like getting reacquainted with an old friend. His melodies carry a welcome familiarity that carries you back to his earlier work with Del Amitri. And by the way, that’s a good thing.