Album Review: ‘Together’, The Explorers Club 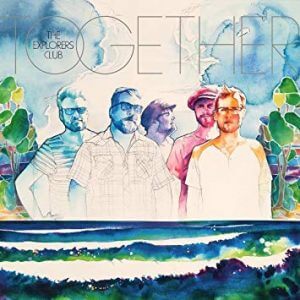 It would be easy to pigeon-hole The Explorers Club as a Beach Boys sound-alike band. Their sing-along melodies, gorgeous layered harmonies and lyrics all recall the Beach Boys. But they’ve always managed to put their own fingerprint on their music so that they don’t sound like a tribute band. It’s a sound that recalls the Beach Boys, but doesn’t copy them blatantly.

With their latest release, Together, it seems like they’re beginning to find their own sound, which, admittedly, still pays homage to the Beach Boys but takes it to another realm. Mellow at times, playful in others, the album will satisfy long-time fans while launching the band into new territory.

The opening title track sounds at first like a lost Steely Dan track, with brass, synthesizer and syncopated drum beats accenting the melody, but then the song changes pace during the chorus and immediately recalls the Beach Boys’ “Wild Honey.” The first single “California’s Callin’ Ya,” is a 50s throwback, with a slow-dance pastiche that doesn’t sound like anything they’ve attempted before. It’s the first hint that something’s different here.

As the album progresses, you realize that The Explorers Club has evolved their sound to more of a High Llamas interpretation of the Beach Boys – a modern, experimental sound that recalls the surfer group without blatant references. It’s a stripped-down sound; the band has been pruned from the usual six or seven members down to five, and so every note counts. Each song has been carefully crafted to take advantage of the leaner group.

Nowhere is this more apparent than on “Gold Winds”, which sounds atmospheric and breezy while still keeping the spot-on harmonies that the group is known for. The standout track is “Perfect Day,” with the group sounding like the Four Freshmen singing almost impossible jazz harmonic progressions – things that Brian Wilson practiced over and over as a teenager to develop that Beach Boys sound.

There are some vintage Explorers Club songs on Together that hardcore fans will find enjoyable. “Once In A While” is upbeat and sounds somewhat like “Do You Love Me?” from their first album, Freedom Wind. The harmonies are apparent throughout, and the song has a melody that instantly takes hold of you. “Quietly” features falsetto vocals by bassist Wyatt Funderburk, and takes a surprise turn at the end with an impassioned outro from lead singer Jason Brewer.

Yes, the words Beach Boys still come up when describing the music, and Brewer, the main songwriter, does not hide the fact that he is a big fan. But track for track, Together is their best effort yet, showing a maturity in songwriting and maybe, a bit mellowing out.