All the World’s a Stage with StageIt 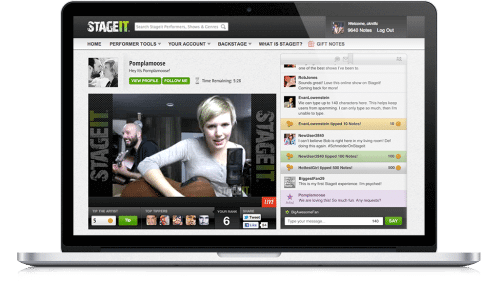 Every Wednesday for the past six weeks, Mike Viola has taken a guitar, powered up his laptop, and performed in front of an intimate audience of about 50 people online – most of whom are in the United States, but some who are watching from Canada, Europe and Japan.

The platform is StageIt, and musicians ranging from Jimmy Buffet to Sara Bareilles are using it to perform for their fans – and make some money. Run by Evan Lowenstein (of the 90s duo Evan and Jaron) , the company promises a “front row seat to a backstage experience.”

“All you need is a laptop and wifi,” says Tyler Palmer, Director of Artist Relations for StageIt. “The artist sets the venue, and we’re just here to help them.” Fans go to the StageIt.com site, pay a suggested amount – usually a fraction of what you’d pay for a regular concert – and watch performers on live streaming video play for about 30 minutes with an extra 20 minute encore. They can interact with the musician and with other fans through a chat function.

Viola, a 30-year veteran of the business, is right at home with an intimate crowd. People comment on the performance through the chatroom, requesting songs, and Mike talks to the crowd as if they’re in the room with him. People express their appreciation not through applause (no easy emoticon for that), but by “tipping” him with tokens, which they have bought before the show for 10 cents each.

Some might see this as just a way for struggling artists to help pay their electric bill. I mean, nobody makes money off this model, do they?

“Artists are walking away with the majority of the money made at a show,” Palmer says. “This is a completely new model, a completely new revenue stream.” He cites Pomplamoose, a duo whose recent StageIt show made more money than the duo made during their entire west coast tour. Setting up a concert is free; StageIt takes a cut of the revenue to pay for bandwidth and overhead, and the rest goes to the artist.

But this isn’t just a money maker or a PR opportunity for the artist. I sensed something else going on here. Within three weeks of Viola’s StageIt shows, I began recognizing the names of the fans attending each show. These were diehard fans who know obscure demos that Viola recorded 20 years ago. Soon the group reformed on Facebook, discussing each show during the week and, with Viola’s blessing, uploading rare recordings and live concerts for all the members to hear. There’s even talk of T-shirts for the group.

This couldn’t have happened 15 or 20 years ago. Viola has attracted a small but fervent following – people who truly appreciate the genius that he is – and knowing that other “weirdos,” as Viola affectionately calls us, are out there sharing the same passion for his music helps us realize that good pop music is still alive. The StageIt shows are just the artist, his music and his personality. There is no paying $75 for a nose-bleed seat in a jam-packed arena, where the artist constantly has to entertain tens of thousands with light shows, bat-eating, and amputees bouncing on trampolines.

It’s all very informal. If Viola doesn’t like the way a song sounds, he’ll just stop and start another one, or play a request from someone. Sometimes his daughter stumbles in on a performance, waves at the camera and walks out. Once, Viola stopped in the middle of a song, searching for lyrics to a rusty track from an unreleased album. A fan quickly obliged with the lyrics, typing them in the chatroom feature so he could continue singing.

And by all accounts, Viola enjoys it, getting from this small crowd the adoration and appreciation he has deserved for so many years. He quips, “Instead of spending money every week on psychotherapy, I now play a 50-minute Stageit show and put a little change in my pocket.”