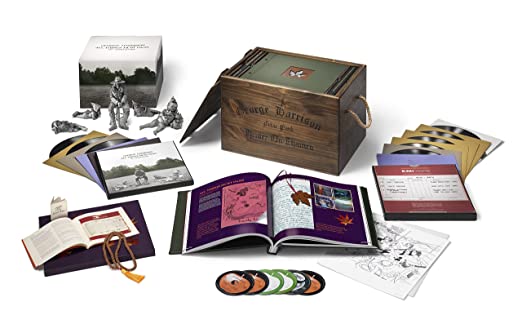 It seems like everyone from Prince’s estate to Paul McCartney is re-releasing special super-duper deluxe versions of old albums, giving us unreleased demos, booklets and special vinyl reissues that have the most ardent fans shelling out hundreds of dollars to own them.

Add George Harrison’s family to that. All Things Must Pass, his breakthrough triple-disc solo album, gets a fourth reissue and yet another remix. This one ranges in price from $37.99 for the MP3s to an unheard-of $1,000 for a special vinyl release that features the following items packed in a wooden crate:

So why do we need another release of this seminal solo album?

All Things Must Pass was Harrison’s coming-out party as a songwriter. His prowess had grown with the last few Beatles albums, and his first solo album marked his creative zenith. He had so much material waiting in the wings, unreleased on Beatles albums, that he decided to make a triple album. It’s epic in scope, with producer Phil Spector’s sweeping orchestral arrangements and Wall-of-Sound production providing the background to many of the songs.

But a few things bothered me about this album, one being Spector’s over-production. He made Harrison sound like just a lead singer of a band, burying his vocals and adding tons of reverb, brass and strings to the songs. It doesn’t really sound like a solo album, and at times, it sounds like a girl group from the early 1960s (“Awaiting on You All”, anyone?).

Harrison’s son, Dhani, who was the executive producer of the project, said his father hated all the reverb on the original. “He said this to me a million times: ‘God, that reverb!’ ” he told Rolling Stone. Using a complicated technique called ultra-remastering, producer Paul Hicks has created a clean album that brings Harrison’s voice to the forefront. And even though the younger Harrison winces at the term “de-Spectorization,” there is definitely less of the famous producer’s fingerprints on the tracks.

Nowhere is this more apparent than on such standout tracks as “Wah-Wah,” “Let It Down,” and the outstanding title track. The brass is still there but takes a back seat to guitars, drums and vocals. Harrison wasn’t blessed with an outstanding voice — it’s a little thin — but it is emotional, earnest and right on pitch. Hearing his voice ring out from the cacophony Spector created makes the album sound more genuine. The only track where the “de-Spectorization” is missed is the epic 7-minute masterpiece “Isn’t It a Pity,” which seems to lack the emotion of the original masterpiece. It’s a piece that deserves extravagance.

All Things Must Pass — The Outtakes

Of course, what would a reissue be without outtakes? Dhani Harrison has given us not one, not two, but three discs of demos, and it’s interesting to see how the songs developed, especially after Spector got ahold of them. The demos of “What Is Life?” and “All Things Must Pass” are superior to the ones on the finished album, and with just a little work could have replaced Spector’s versions. Others are simply unfinished, but it gives us a glimpse of what Harrison wanted to do with them. Some, like “Wah-Wah” and “Awaiting On You All,” are 180 degrees from what Spector gave us. That’s not necessarily a good thing.

Back to my quibbles with the album. Another problem with All Things Must Pass is that it is way too long. The third disc, known as the “Apple Jam,” could have easily been removed from the initial release, made it more accessible to budget-conscious buyers, and been more successful. But it’s there, and many fans love it, so it’s a part of the reissue as well. Harrison had enough material for two studio albums but decided to put all his eggs in one basket; as a result, his follow-up, 1973’s Living in the Material World, is a step down in quality.

Harrison fans are a little tired of reissues and having to shell out more money for yet another “new improved” version, but this seems to be the quintessential mix (although Dhani mixed 110 tracks in total, enough for some possible reissues later). A little Spector goes a long way, and with this version of All Things Must Pass, Dhani Harrison has found the perfect balance.