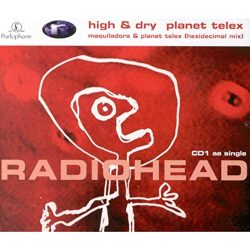 It probably started innocently enough, as all arguments do. I don’t even remember what it was about. But by the end of the argument, I was fuming mad at my wife, but couldn’t run off or slam doors because I was driving.

So instead, I turned on the CD player.

Radiohead’s The Bends was in the player, and I turned the stereo up to 11, planning to create my own music montage from a bad movie – sort of like Rocky Balboa driving around to Robert Tepper’s “No Easy Way Out” in Rocky IV. I’m sure my wife thought I was going mad.

But I quickly lost myself in “Planet Telex,” the first track. The song began with a spooky whistling wind, sounding foreboding, supernatural, and at the volume I had it, downright scary. Then a throbbing keyboard pounded out power chords before it was taken over by a distorted guitar. Thom Yorke wailed away, juxtaposed by the howl of the guitars, “You can crush it but it’s always here / You can crush it but it’s always near.” I didn’t try to crush my anger and instead just let it ride through the verses and the confusing sounds.

Then the chorus hit in a glorious way, and some order came to the song. And as joyful as the chorus sounded, Yorke proclaimed, “Everything is…broken / Everyone is…broken.” Yes, things seemed effed right now, but in some warped way, Radiohead were telling me that it was okay. It was some declaration of imperfection, taking some solace in knowing that shit happens, things can get disorderly and downright frustrating. It’s in this imperfection, our emotional outbursts that seem to defy logic, that makes us human.

As the wind died down toward the end of the “Planet Telex,” it seemed to take away my anger with it. I turned the stereo down again, and at least inside, I felt better.