August and Everything After – Counting Crows 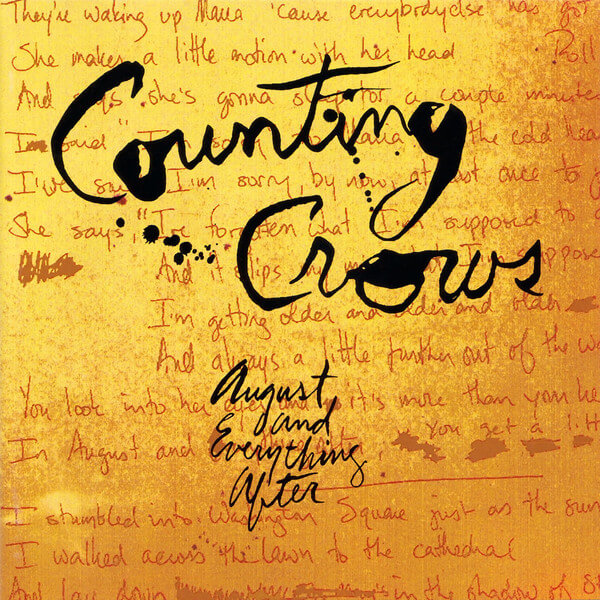 Most of my friends and family know that my musical tastes tend to lean to the obscure – the less known, the better. I give two reasons for this:

My friend Frank used to be good at this. He “discovered” such musical gems as “One Night in Bangkok,” Wham’s “Freedom,” and “Breakout” by Swing Out Sister – weeks or months before anybody else heard them. (Granted, these aren’t monumental classics, but we liked them, and it made Frank the one to look toward for new, fresh music.)

As for me, I can say that I discovered Counting Crows months before radio stations began playing “Mr. Jones.”

Counting Crows was unheard of outside of the San Francisco Bay area when they opened up for the opening act (Suede) for the Cranberries at a music festival in Atlanta in October 1993. My sister and I came to the park early expecting to suffer through a few hours of marginal alternative music just to hear the Cranberries that evening.

Few people were present when Counting Crows took the stage, and even fewer were listening. I had never heard of them, but after a few songs, something grabbed my attention – it may have been their Hammond organ, or it may have been Adam Duritz’s impassioned vocals. The songs were memorable, and the band played with such precision and unity that they sounded like seasoned veterans. By the time they had finished their short set, I was enthralled. I immediately found some concert organizers and asked, “Who was that? Do they have an album?” I wanted to leave right then and go find it.

I found it the next day. Like the performance, August and Everything After was perfect. Every song was carefully crafted, from lyrics and instrumentation to the flawless production. Adam Duritz’s emotional pleas squeezed every bit of feeling from a lyric.

August and Everything After

The sound was not new; critics likened them to Van Morrison and R.E.M. — rootsy, soulful and catchy. “Omaha” was clearly a nod to The Band’s classic song “The Weight,” while “Time and Time Again” sounded like a Rolling Stones ballad.

But Counting Crows sounded their best when they found an original voice. “Anna Begins” opens in a minor key with a mandolin setting a melancholy mood. A syncopated drumbeat makes the song disjointed and lost, as Duritz goes back and forth on whether to pursue a relationship with Anna. But then the chorus resolves everything as the chords change to a major key, the drumbeat settles into a comfortable rhythm, and Duritz begins to see the beauty of falling in love:

She can’t stop shaking and I can’t stop touching her and . . .This time when kindness falls like rainIt washes her away and Anna begins to change her mind

“Sullivan Street” is about as simple as a song can get – only four chords. Like most Counting Crows songs on August and Everything After, the chorus is the high point of the song, but this chorus is even more special with Maria McKee singing backup. Her voice matches Duritz’s in intensity as they both admit, “I’m almost drowning in her sea . . . she’s almost everything I need.”

The group saves the best for last. “A Murder of One” announces the end of the album with a song lasting almost six minutes, and each second is filled with such energy and passion. It makes you yearn for more.

Counting Crows has released several albums after August and Everything After, but now the secret is out of the bag (the debut album peaked at No. 4 and spawned three Top 40 hits, including the overplayed monster smash “Mr. Jones”). Each subsequent album seems like an inferior copy of the original, coming close at times but missing perfection.

But I found ’em, dang it. Remember that.