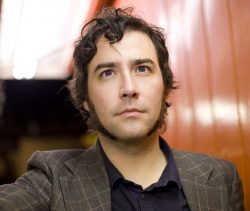 It’s not like Bleu McAuley is a superstar – the number of fans in Atlanta probably doesn’t top two dozen – but he is part of what I call the Justice League of Power Pop. Along with his friends Mike Viola, Kelly Jones, Steve Eggers and Roger Joseph Manning Jr., he makes music that is so pleasing to the ear, I know that humans have a higher calling.

I have nothing to worry about, though. Bleu arrives, trademark mutton chops in tow, and immediately extends a hand with sincere apologies. He is gracious and talkative, despite the fact that the sound crew is anxious for a sound check. We talk about his collaborations, the state of music today, and his future plans (see my Q&A with him).

Two hours later, Bleu takes the tiny stage by himself, and I realize that we’re in for an acoustic treat. Armed only with a guitar -no microphone in sight – he reduces the crowd to silence with “In Love With My Lover,”  a song from his latest EP. I’m amazed by his ability to make the guitar whisper, making the audience strain to hear each chord while his unamplified voice comes out clear and true. When he begins to wail over the chorus and the guitar grows, you can feel the intensity heighten.

Bleu’s persona is 180 degrees from the affable, humble man I met with earlier. He cracks jokes, makes audience members choose between songs on his set list, and recruits whistlers for one of his songs. “I think I just heard someone say, ‘What the hell is going on here?'” he says between songs.

He asks for a show of hands to see who specifically came to see him; about 20 hands go up. Yep, that’s about right, I think to myself.

His set is disappointingly short – about 45 minutes – because inexplicably, he’s an opening act. He uses drum tracks on my favorite song, the soaring, bittersweet “We’ll Do It All Again,” and background vocals for “No Such Thing As Love,” which add depth to the songs.

But it’s clear that the centerpiece is Bleu, his rich voice and his achingly beautiful music. I feel bad for Evan McHugh, who has to follow him.

After the show, I spot Tim Smith (Jellyfish, Umajets, Sheryl Crow) and former Jellyfish sound guy Shalom Aberle. I suddenly realize that I’m among members of the Justice League, and I’m in awe once again.

All in all, not a bad evening.