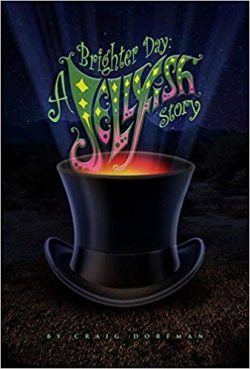 The biography of Jellyfish, one of the least-known but most revered bands in pop music, the book reads like a history of the Titanic: The group debuts in 1990 with four multi-talented artists and the makings of a hit record; glances off an iceberg when two of the band members leave; follows up their first album with an ambitious second album that no one buys, and then slams into an iceberg of competitiveness and distrust and sinks, their songs now distant memories of another era.

As one of the hundreds, maybe thousands of rabid fans worldwide who still follow the members of the ill-fated group, I knew exactly what was going to happen. And it hurt to read it.

I myself penned my own biography of Jellyfish that appeared in a 2004 edition of the short-lived Youthquake magazine. I only wish I had the resources that author Craig Dorfman did. He had access to all six touring members of Jellyfish; their producers, manager and sound man; and family, friends and various collaborators.

The result is a detailed biography of the band, the core of which were drummer Andy Sturmer and keyboardist Roger Joseph Manning Jr., two musicians and songwriters who had a knack for writing gorgeous melodies and harmonies and eliciting wonderful sounds from their instruments. They also dictated what songs were going to be on the albums and how they were to be played. As a result, the other band members, some of whom were songwriters themselves and all accomplished musicians, felt like session members for a duo’s recordings.

From the beginning of the recording of their debut album Bellybutton through the ill-fated tour for the fantastic Spilt Milk, the band had too many egos but played brilliant music in spite of the inner fighting. Sturmer was the de facto leader, sometimes telling bass players how to strum their instruments to get the exact timbre of the notes that he wanted. Manning was caught between the other angry members and Sturmer, wanting to keep the peace but in the end always siding with his childhood friend.

But the music. Oh, the music was divine, a cross between the Beatles, Big Star and Queen, with such care taken to make sure everything was perfect. Writes Dorfman:

Spilt Milk was laced with busy, unconventional chords, making each singer’s part idiosyncratic and occasionally almost dissonant. If (bassist) Tim (Smith) had to sing a D while Roger sand a C, the two notes rubbed unnaturally, and each would have to fight the instinct to match the other’s pitch. Sometimes, Roger’s arrangement called for them to double (or even triple) a note, split off, then return in a different combination.

The group had signed with Charisma Records and toured with such high-profile groups as the Black Crowes, World Party and Tears for Fears. The members recreated their dreamy harmonies onstage and had music journalists opting for the opening band’s set over the headliners. Bellybutton was a limited success, setting them up for an even bigger album, but Sturmer drove away guitarist Jason Falkner (who went on to have his own solo career) and bassist (and Manning’s brother) Chris Manning, leaving them to audition other members.

The resulting album with the new members, Spilt Milk, was complicated and bombastic – and stunning. But perhaps too much was going on in the album – harps, massed choirs, strings, brass, flutes, wind chimes, harpsichords – for the buying public to take notice. There may have been, as the Emperor of Salzburg suggested of Mozart’s music in Amadeus, “too many notes.” It was a remarkable achievement of sound, melody and harmonies, but it appealed to almost no one. It reached only #164 on Billboard‘s album chart, 40 positions lower than Bellybutton.

Tensions between Sturmer and Manning finally came to a head during the stressful recording of Spilt Milk, where their ideas finally collided.

Over the next 45 minutes, both Roger and Andy questioned whether the band had just broken up, whether they’d have to leave their record unfinished – almost done, but not enough to release – whether they’d just sent each other on to solo careers, and most alarmingly, whether they’d ruined their friendship … Whatever had sparked it, Andy took Roger’s words as a sign that he was no longer content with the balance of power in their partnership.

Roger felt exactly the opposite, seeing Andy’s criticism of his arrangement as “a dismissal of his hard work.” The tensions gradually rose in the band and through the resulting tour until they spilled over on a bus ride to New Orleans. They almost canceled the rest of the tour, but decided to continue on, their friendship blemished and their future uncertain. They came up with a few ideas for a new album,  recorded some demos, but the end came too soon. The dream was over.

Sturmer and Manning were the 90s version of Lennon and McCartney, and like the two rock idols, they, too, dissolved their friendship over the band. The end came in a simple, cordial phone call from Manning to Sturmer, where the two agreed that they were done. And that was the last time they spoke. Twenty-four years have gone by without them exchanging one word.

The book concludes by detailing what all the band members did after Jellyfish; from session work and solo albums to producing and writing theme songs for kids’ television shows, the former members all had varying levels of success; none achieved superstardom. But they were always to be remembered as members of Jellyfish – like their contemporaries, Big Star, one of the greatest bands never to have made it to the big time.

And it is sad to read, because Dorfman does such a great job of detailing the band members’ talents. The description of the seemingly unstoppable forces that dissolved the band not once but twice is like watching a train wreck repeatedly in slow motion. You know what’s going to happen, and you know the damage that will occur, but it’s still painful to watch. No matter how many times you watch it, it never changes.

Where Dorfman succeeds in Brighter Day: A Jellyfish Story is not only his painstaking detail to conversations and rationalizations that each band went through in interpreting Sturmer and Manning’s directives, but in summing up their legacy:

By bringing a seriousness and craftsmanship to every step of the process – writing, arranging, recording, performing – Jellyfish validated music that had historically been dismissed as so much sunshine and bubblegum. That they did so in 1990 and 1993, wedged in between two decidedly less sunny movements – hair metal and grunge – made them easy to overlook at the time.

But with every passing day, more people were listening, over and over, to Bellybutton and Spilt Milk. The records inspired countless young bands to strive for melodic gold and to agonize over their harmonies and to do so proudly. Musicians of all stripes realized exactly how much better their records could be if they took no detail for granted.  . . .  By the end of the decade, critics and music journalists used “Jellyfish” as shorthand for impeccable musicianship, melodic inventiveness, and the ability to make the tried-and-true pop song format sound untried-and-truer.

Over the years, we Jellyfish fans have been lucky; in addition to savoring records by Manning, Falkner, Smith and Dover (Sturmer remains somewhat of a musical hermit), we have been treated to a box set, a tribute album, an acoustic album, instrumental versions of all the songs and re-releases of the two albums on colored vinyl. That’s a lot of material for a band whose career lasted just four years. And Brighter Day: A Jellyfish Story can now join those releases as the definitive biography of the band that could’ve been. We have all we need – or all we can get, barring a reunification of the band.

And like the much-wished-for Beatles reunion, despite Dorfman saying that he hasn’t ruled it out, we know deep inside that it will never happen.