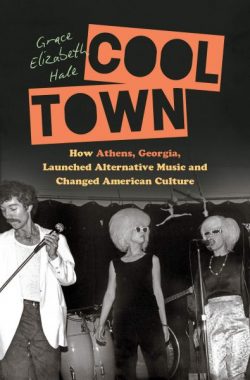 In the mid-1980s, Athens, Ga. was the hippest place in the country. The music world had its ears pinned to the small university town, waiting for the next big thing to come storming out of there. It had happened with the B-52’s and R.E.M. What other goodies awaited us?

I was lucky to live close enough to Athens during this time. My friends went to the University of Georgia, and when I went to visit them, we would go to a different venue each night and listen to bands play. I once saw Michael Stipe when we were eating at Rocky’s Pizzeria and almost freaked out, but my friends told me to remain calm and not notice him. That’s the way he liked it — anonymous and comfortable in his hometown.

By that time, Athens had already blown up to a near-mythical reputation. But Grace Elizabeth Hale’s Cool Town: How Athens, Georgia Launched Alternative Music and Changed American Culture goes back to the beginning of the craze and determines how a sleepy college town emerged as the leader of college rock in the 1980s.

Part memoir, part ethnography, Hale peels back the onion and, through dozens of interviews with “townies,” the term for the in crowd in Athens during the 80s, she points toward a gay subculture that emerged on the heels of punk rock and Andy Warhol. Being in small Southern town in the late 1970s was boring, and the townies found things to do — holding parties in the old plantation houses and raiding thrift stores for garish and distinct wardrobes.

Excited by punk’s DIY movement and encouraged by art professors at the University of Georgia to create their own art, they did what most young kids in New York were doing forming bands. The B-52’s played at a party in Athens on Valentine’s Day 1977, and the movement had begun. They quickly moved to New York, where they were adored by critics and punk fans alike.

“By the mid-1980s, what was happening in Athens proved that people did not have to move to the big city to live an alternative life,” Hale writes. “In the late 1970s, though, that scene emerged out of the very direct movement of musicians and ideas back and forth between Athens and New York.”

Groups such as the Bar-B-Q Killers, Oh-OK and a band that got lost in the Athens music craze, Pylon, get lots of ink in this book and are seen as the progenitors of the music subculture that grew around the town in the early- and mid-1980s. In contrast, R.E.M., by far the best-known group from Athens, were seen as too “poppy” and favored by the fraternities on campus.

“Some Athens bohemians believed R.E.M. suffered from . . . members with too much musicianship who produced a predictable sound,” Hale writes in Cool Town. Imagine that – being criticized for being too talented. They were denounced for being too conservative, and it became trendy “to be bitchy about R.E.M.” That’s going to extremes, and there really isn’t enough love in the book for the group that put Athens on the map and continued to fight for it and be a part of the community well into the next millennium.

Hale calls out the posers — artists such as Matthew Sweet and the Flat Duo Jets — who moved to Athens to be part of the movement. Sweet is quoted as coming to town “to climb the ladder.” She is careful not to criticize their talent – Sweet has gone on to create several memorable power pop albums — but shows how important it was during the 1980s to be associated with Athens — and how close-knit the community was.

Cool Town brings out all the colorful characters of Athens during the 1980s — people like Ort and Jerry Ayers, along with many people whom I recognized from my short trips to Athens. Hale, like most townies in Athens during the 1980s, and not only formed her own band but owned and operated the Downstairs, one of my favorite venues.

The book ends with the election of progressive Gwen O’Looney to the CEO of Athens-Clarke County government. It was a sign that the bohemians had won; that small movement in the late 1970s had blossomed into a political movement that helped preserve downtown Athens and give progressives a rare voice in the conservative South.

Not bad for a bunch of art students wearing vintage clothes.