Book Review – I Would Die 4 U: Why Prince Became an Icon 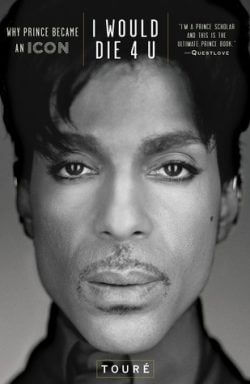 A few months ago, I was driving down the road with my kids when Prince’s “Kiss” came on the radio. After doing my best falsetto whimper while singing along, I asked them if they knew who sang the song.

“Michael Jackson!” they shouted in unison.

I then pondered how to introduce elementary school students to the music of His Royal Badness.

During the 1980s, Prince was the thinking man’s Michael Jackson. While Jackson sold gajillions of albums worldwide, Prince quietly took hold of Generation X’s psyche and became its mouthpiece. We all liked Michael, but we wanted to be Prince.

Sure, we knew all the words to “Billie Jean,” but we didn’t analyze every word searching for double entendres like we did “Little Red Corvette.”  “Human Nature” was a nice ballad, but it didn’t strike a chord half as deep as the haunting title track from Purple Rain.  And while Jackson was telling us that he was bad in 1987, Prince was preparing us for AIDS, crack and tragedy.

“Stars entertain us. Icons do something much more. They embody us. They tell us something about who we are and who we want to be,” writes Touré, whose book I Would Die 4 U: Why Prince Became an Icon attempts not only to define Prince’s legacy but also to examine why he is who he is – sexuality, symbol and all.

The Voice of Generation X

Prince, Touré argues, was in the right place at the right time. A baby boomer, he sang about issues that deeply affected Generation X because he himself experienced them as a teenager. While previous generations had their defining moments – World War II, Vietnam – Generation X seemed most affected by divorce and the disappearance of the traditional family. Stuck at home without supervision, kids in the 1980s had time to reflect on their lives and yes, experiment with sex and drugs. They were more cynical than their idealist parents, and they wanted to live their lives quickly and fully before the world came to end.

“Everybody’s got a bomb, we could all die any day. But before I’ll let that happen, I’ll dance my life away,” sings Prince in “1999.”  With the Cold War peaking once again and talk of weapons in space, we Gen Xers were certain that we wouldn’t survive 1989, much less 1999. Touré reminds us that in the movies “The Breakfast Club” and “Ferris Bueller’s Day Off,” high school was all we had. Adulthood – hell, even college – seemed to be a death sentence.

Prince was also part of the wave that finally brought black artists into mainstream rock ‘n’ roll. White suburbia had flirted with R&B before (The Supremes, Earth, Wind and Fire), but along with Michael Jackson, Prince boldly knocked down the wall separating all genres. His videos played on the then-exclusively white MTV, he opened for the Rolling Stones, and some critics argue that his album Dirty Mind was a groundbreaking New Wave album. We all mimicked Prince’s guitar solo at the end of “Let’s Go Crazy” and marveled at the Beatlesque sounds of “Paisley Park.” Touré points out that Prince purposely made his band biracial, choosing both men and women, black and white, straight and gay, so that he would not be pigeonholed into one genre. He was an artist for everyone.

This examination of Generation X and Prince’s ties with the group easily merits an entire book, but Touré digresses, choosing also to focus also on Prince’s dichotomy of sex and religion. It’s these two seemingly contradictory concepts that made Prince so fascinating: How could one talk openly of lust and sexual acts in one song, then turn a 180 and preach to us about religion? Touré explains that in many ways, a religious experience is similar to sex, when a pastor, screaming and dancing and sweating, can whip a congregation into a frenzy, with a feeling of ecstasy that rivals sexual climax: “[Prince’s] long moment of superhuman screams belongs equally in a bedroom or in front of a choir at the climactic moment of service,” he writes.

I can’t fully buy Touré’s assertion that Prince used sex to grab the public’s attention so that he could witness to them about the gospel of Jesus Christ. At this point the book becomes more of a study of Prince, his psyche and his lyrics than it does his legacy.

Perhaps it’s because Prince lost me around the time he changed his name to a symbol; during the turn of the millennium he became a Jehovah’s Witness and apparently became more overtly religious in his lyrics. His music, though, never quite approached the quality during his peak popularity from 1980 to 1987; his legacy may have already become cemented before his conversion. But during the Purple Reign of the 1980s, while we sat in our rooms, listened to our boom boxes and daydreamed, Prince helped us become the adults we thought we never would become.