Are We Not New Wave? – Theo Cateforis (Book Review) 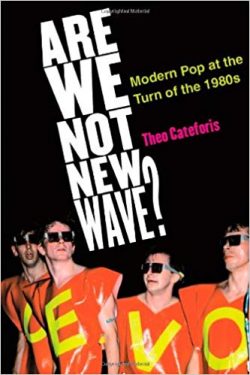 Mention 80s music and most people think of “Footloose,” Madonna, leg warmers and Duran Duran. And mullets. And Aquanet. It’s nostalgic, but laughable to many people.

And that’s a little offensive. Eighties music helped shape who I am; like the AM radio hits of the late 1970s, music from my decade was catchy, full of hooks and melodies that you couldn’t get out of your head. Sure, there was plenty of duds — “Living in a Box,” “Rock Me Amadeus,” everything by Rick Astley — but for each travesty you had melodic gems such as Godley & Creme’s “Cry,” “Diggin’ Your Scene” by the Blow Monkeys,” “Too Shy” by Kajagoogoo, Dexys Midnight Runners‘ “Come On Eileen” and pretty much anything by Wham!. Yes, Wham! – “Wake Me Up Before You Go-Go”, for all its cheesiness and video with the “Choose Life” shirts” and neon shorts, was catchy as hell.

At least Theo Cateforis has a healthy respect for new wave music, devoting an entire book to the phenomenon. And his book, Are We Not New Wave? Modern Pop at the Turn of the 1980s, is not just a chronicle of the movement or a listing of the bands that made up the genre; it’s an academic study.

Cateforis sees New Wave as a movement that was in the wrong place at the wrong time. Confused with punk rock (Punk was originally called new wave), it struggled at first to find its footing, being seen as a commercialization and cheap imitation of the former genre.  It borrowed heavily from the 60s, with power pop groups such as the Knack and the Jam paying a healthy respect for the Beatles and the Who, but was criticized for dipping too heavily into its influences.

Despite its uphill battle, new wave finally found a foothold where punk couldn’t: The top 40. Much of new wave centered on dance beats, and New Romantic groups such as Duran Duran combined fashion, good looks and good music (sound familiar, Beatle lovers?) to become one of the biggest selling new wave acts of the 80s.

New wave faced an identity crisis as well. Almost any 80s band could be described as New Wave, Cateforis argues, citing a 1983 book on the genre that encompassed power pop, technopop, rockabilly, synthesizer/electronic, ska and mod among its categories. Another book split the genre into 130 sub-genres. “Variously described as an ‘umbrella’ or a ‘catchall’ term, trapped between the idealized rebellious purity of punk and the compromised artifice of pop, New Wave has been repeatedly branded as a label bereft of any concrete meaning.”  He identifies new wave as less of a genre and more of a modern pop movement.

Make no doubt that Are We Not New Wave? is an academic book. Some of Cateforis’ chapters center on such concepts as white male nervousness, a trait shown by the lead singers of groups such as Devo and Talking Heads (We still see this today in the Arcade Fire). Another chapter focuses on the B-52s’ kitschy fashion and music and how its heavy 1950s beach-party influences not only paid respect to the era but gave it a new, modern take — in essence, the future that the 1950s tried to bring us into quickly, with its modern appliances and plastic chairs, was now among us.

Another chapter on the synthesizer reminds us of the fine line between man and machine. Gary Numan even looked half-man, half-machine. Cateforis quotes one new wave keyboardist as saying, “As soon as synthesizers came along, everyone said, ‘Oh, wow, outer space!'” The synthesizer would prove to be a defining instrument of the genre, with its ability to mimic so many instruments, but even this “modern” instrument was a step back from some of the ornate uses of synthesizers in the progressive rock movement of the 1970s (see Styx, Rush). New wave bands tended to use older keyboards from the 1960s, with a more electronic, cold sound, and artists played them note by note, essentially taking away the lead guitar as an instrument that carried the melody.

Are We Not New Wave? is a much-needed endorsement of a genre that has been ridiculed too much. It seems that it takes an academic study to make something legitimate, and that’s what this book does. It’s a fascinating analysis of the music of Generation X, and it’s about time someone did it.