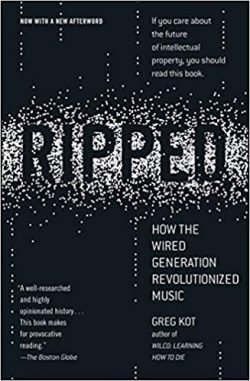 We all know the stories of the online music craze – Napster, the RIAA suing its customers, Radiohead’s “Pay us what you think we should get” philosophy. But Greg Kot’s book Ripped: How the Wired Generation Revolutionized Music is a fascinating analysis of the music industry’s transformation over the past 10 years – a time in which power has been passed from the major labels to the consumers.

Kot, a music critic with the Chicago Tribune, creates a compelling argument that the industry:

“[The music industry’s] power structure, the by-product of a century’s worth of empire building, started to crumble the instant the first music file was ripped onto a computer hard drive and shared online,” he writes.

The free file-sharing sites such as Napster (and Kazaa and BitTorrent later) created a new paradigm regarding theft and copyright laws. Once people got something for free – and sometimes regardless of the moral or legal implications – they found it hard to pay $15 for it. Interspersed throughout the book are quotes from college-age kids who have always downloaded music; they know no other avenue. “It doesn’t feel wrong,” said the teenage son of a former record executive.

Kot dedicates chapters to bands who have figured out the new system before the major labels: Prince, Wilco, Death Cab for Cutie, and Arcade Fire. He points out the power of blogs (yay!) to create buzz about a group that can gain enough momentum to launch a group into stardom.

In essence, the industry is becoming more democratic – the days of major labels producing multi-platinum albums are numbered. To quote what Bleu said in my interview with him last week, “The music landscape is so fractured now, which is a good thing and a bad thing. It allows everybody to focus on just what they like, but it also means that … it’s the death of the rock star basically, the rise of the many independent smaller stars.”