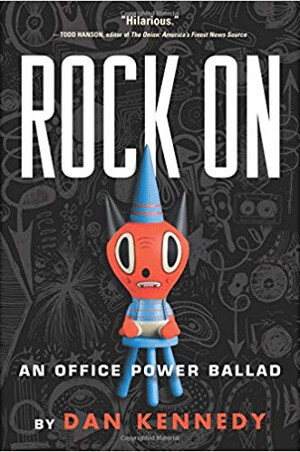 I don’t know what Dan Kennedy was thinking when he agreed to be the marketing director for a major record label. Did he really think that he would help bring a talented new artist to light? Was he really that naive?

Apparently so, and it makes for a great story. His memoir, Rock On: An Office Power Ballad, is a tale of his brief tenure with Atlantic Records, and it is filled with too-funny-to-be true vignettes that bring to mind The Office.

The tales come quickly, from the rumor that recording artist Fat Joe won’t work on his new CD until the label buys him a $30,000 fur coat (he’s the only one who laughs during the staff meeting), to young professionals who agree to everything the vice president says, to his first big project, an advertising campaign highlighting Phil Collins’ 25 years in show business. Ick.

On top of the almost surreal moments of corporate rock at its worst, Kennedy tries to fit in with this new culture. He tries to decipher hip-hop lingo, wondering why one of the artists calls him “B,” and trying to decide whether to use the same moniker back. He tries to act cool around the Donnas, even using the word “chill” at one point:

When I hear it come out of my mouth, it sounds like a tape of an undercover cop trying to convince downtown perps that he’s not a square. Or one of those cheesy modern dads trying to get his daughters to think he’s cool so they’ll admit to drinking beer on the weekends and then he can lecture them and insist that if they’re going to drink, they do it at home.

Kennedy is in a difficult position – too good to be around the power-hungry corporate folk, but too tied to his classic rock and punk roots to really feel anything for the music that his label tends to back. But before he can make a profound statement and thumb his nose at the industry, some rich kid buys the label, and the layoffs ensue. The announcement of his layoff comes from a senior manager sitting behind a $50,000 desk.

It’s at this point that the Rock On grinds to a halt. You keep waiting for Kennedy to fill the new CEO’s office with Michael Bolton CDs or paint anarchy signs on the front door to the building. But perhaps it’s his book that has the last laugh, exposing major record labels for the money-grubbing, image-conscious hacks that they are.

Not that this is a big shock to anyone. But read it anyway, and pass it on.