Book Review: You Never Give Me Your Money 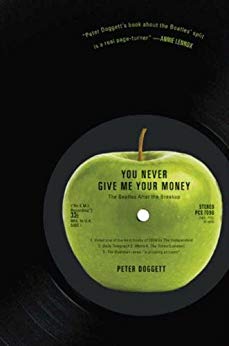 At first glance, Peter Doggett’s book You Never Give Me Your Money: The Beatles After the Breakup seems to be more of a summary of the Beatles’ business and legal dealings than it does a history of their post-Beatles relationship. But then you realize that a big part of the years following their disbanding was spent in courtrooms and depositions – a sad, petty end to what was the greatest pop group of all time.

But the book is so much more than that. Despite the fact that the band members went their separate ways, their lives were still intricately intertwined. Doggett shows us that the group came tantalizingly close several times to reforming, but fate always seemed to step in – be it Yoko Ono’s dominance over John, George’s animosity toward Paul, or Paul’s crafty PR moves designed to create leverage in his business dealings.

The research here is tremendous; most of the major points in the Beatles lives post-breakup is here, with a close attention to the group’s confidantes such as press officer Derek Taylor, producers and engineers, and even John and Yoko’s astrologers. Each gives their own unique take on an event, which makes for a well-rounded view.

It’s clear that Doggett is a fan of George Harrison, and in the acknowledgements he confesses this. Harrison gets a glossed overtreatment in the book, with just a casual mention of the “My Sweet Lord” controversy that undermined much of his post-Beatles career. But his bias is a welcome change from the usual John vs. Paul battle that most authors take when penning a Beatles biography. George emerges as a bitter man who is constantly haunted by the ghosts of the Beatles – and blames it all on Paul. Ringo is seen in the light of his alcoholism and the “luckiest man in showbiz” moniker, although his revelation that Ringo has an odd propensity to say  “peace and love” multiple times in the course of a conversation was intriguing.

There always seems to be two sides to Paul and John, and Doggett does an admirable job of presenting the good and bad. But his summary of Paul is spot on:

How could Paul McCartney maintain his own career while his former partner was being canonised? How could he stake his claim to a proper share of the Beatles’ artistic legacy when he was uncomfortably mortal and Lennon was up among the gods? Personal grief was only one of his curses; for the rest of his life McCartney would be battling Yoko Ono for his place in history. There were now three Beatles, and one saint. Perhaps that was McCartney’s cruellest fate; he desired nothing more than to regain Lennon’s love, but now he was condemned to compete with Lennon’s memory for the recognition that, rightfully, should already have been his.

It’s a sad story, really. Each Beatle (with maybe the exception of Ringo) wanted their freedom from what they thought was a stifling existence within the greatest band in the world, but each one failed to live up to their Beatle alter ego and had to continue fighting it – and each other.