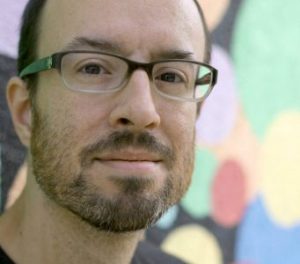 Brandon Schott is one of those people you root for in Hollywood: Happily married with several kids, working in the music industry but trying to make it in the music despite the roadblocks indie artists face, and recovering from a stage 3 cancer diagnosis, he’s upbeat, friendly and makes beautiful melodic music that sounds as if it’s emanating from his happy soul.

Brandon was gracious enough to answer a few questions from yours truly in the wake of his fifth new album, Crayons & Angels, available for order at his website. (Read my review)

What was the motivation for this album?

I did a record called “Dandelion” back in 2008 on the one year anniversary of my cancer diagnosis and treatment, which was very much a meditative collection of songs reactive to that experience. Many of the earliest songs on Crayons & Angels were also written around this time, and set aside to be a joyful countermeasure to the “Dandelion” trip. In many ways this new record is a spiritual companion to “Dandelion,” though leaning more into a celebration of spirit vs a contemplation of spirit. That’s really the heart of “Crayons & Angels,” though it definitely also has its darker corners.

The album seems very upbeat – almost naive and innocent, and hearkening to some earlier era – lots of tack pianos, horns, bells and ukeleles. Was that deliberate?

Yes and no, as I said – it was definitely intended as a celebratory record, but more inspired by the tone of many of the more melancholy summer records of the 60s. The way The Beach Boys’ “Warmth of the Sun” or Bryan Hyland’s “Sealed with a Kiss” can each play very simplistically like “lost love” teenage anthems, but underneath it there’s a richer sadness, a melancholy that undercuts the sweetness. That particular kind of balance between light and dark was what I tried to explore on this record.

My favorite track is “Henry” – so positive and jaunty. What’s the basis of that song?

Thanks so much! For a long time my wife and I were the first of our close friends to have kids; Henry was written after the next couple within our inner circle had their first. It was a very congratulatory energy that was put into the tune and the track for sure (and I think that comes across). And for in the immediate aftermath, I felt that tune very literally, but then around the same time the song was written I was also very insulated from the music scene, kind of tucked away in the studio – trying to find my way within these new batch of songs. I came to realize after time that the song is as much about my own self-encouragement as it was anything else – became a hymn of sorts to anyone struggling to find their voice in this world.

You also seem to revisit a lot of themes via repeated titles, a la Sergeant Pepper. Would you call this a concept album?

It was definitely sequenced with the “album” experience in mind, and has a certain thread if you listen from top to bottom, but I wouldn’t go as far as to call it a concept record. The record does has 4 distinct sides and was designed for vinyl – each of which has its own tone and texture (much like Todd Rundgren’s Something/Anything?), each “chapter” starts with an instrumental etc. While I do feel it has a strong thematic thread running through it if you listen back in full, conceptually, I don’t think you need any of the surrounding songs to appreciate any of the songs on their own.

How was it working with Kelly Jones?

It was amazing – we did an interview with her for my “Defying Gravity Music” series, during which she spoke with great passion about the work of Judee Sill. Naturally, being the music obsessive I am I took a deep dive into Judee’s work shortly thereafter and was incredibly inspired. She’s like a cross between Carol King & Elliott Smith – that balance she struck between spirituality and emotional strain was uniquely her own. Subsequently, the lyric to EVERY LITTLE SONG was massaged into place very soon after and became a centerpiece for many of the themes we explore on the record. To have Kelly sing on the song seemed like a fitting gesture, given its origin, brought the song home. That she agreed and graced the record with that amazing voice of hers is such an honor. On top of that she’s one of the sweetest people I’ve ever met in this business.

Were you nervous or intimidated working with such a pop icon as Nick Heyward?

Nick and I played a show together back in the winter of 2013, I backed him up on keys and various trinkets and we had a blast at the gig and rehearsals before it. Since then, we’ve kicked a few things here and there across the internet – I produced his version of “Almost Blue” for the Beyond Belief compilation that also spawned my read of “Riot Act,”  etc. So to work with him on this record, there was already a shorthand between us which was great. When we were coming to a close on Crayons & Angels, I asked if he’d be down to record some background vocals for “Better Version of Me” and again – like Kelly – he graciously agreed and just knocked it out of the park. It’s such an honor to hear him on that cut; I remain more than anything a huge fan.

What was it about Elvis Costello’s “Riot Act” that made you want to include it?

This was one of the first Costello songs I’d ever heard, and I’ve always loved it – subsequently, I recorded it for Beyond Belief, had it set aside in the pool of songs in consideration for the record. The simplest answer is that it just fit in the thread – helped move the story along.  Coming out of the melancholy of EVERY LITTLE SONG, RIOT ACT is the sound of a someone rallying against the past – or the forces that oppose him. Side 2 of the record was for me the darker of the “sides”, when we started playing with sequencing the song just felt right in that nook of the journey.

Tell me about Andrew’s role in the making of the album. How did you guys meet up?

Andrew and I started working together when he put out his first compilation, Drink a Toast to Innocence. I recorded a version of Andrew Gold’s “Thank You For Being A Friend” for the project, and we just hit it off straight away – had similar music tastes, various friends in common. Also, I found out he’s a huge Kirsty MacColl fan so we’re friends for life now! haha…anyway, when it came time to partner up with someone to bring Crayons & Angels to social life, it was a natural fit to work with Andrew – he and I already understood each other’s aesthetic, had a working relationship & history. It was his influence that brought the record to Kickstarter, which I’m pleased to say successfully funded last month and consequently we’re now able to release the record on VINYL, which is tremendously exciting.

How do you think you’ve grown as a songwriter and artist with this album?

I definitely feel like this record is the culmination of so much of my work over the years, there’s a little bit of my everything on display throughout – through the power pop inclinations, the whimsy, the melancholy, the production/arrangement sensibilities. More than anything I’ve ever done, this is probably the most eclectic set yet – and the fact that it hangs together the way it does is something I’ll always be proud of as a producer. As a writer, I hope I’ve pushed myself harder and become more editorial on this project – lyrically especially, I wanted this to have a certain depth. I think I’ve written outside of myself a little better, some of the work is a little less autobiographical – little more tone driven. Time will tell if my feelings on the record hold up as the years unfold, but as it stands right now I’ve never been prouder of a record I’ve done.

Who are your influences? Who are you listening to now?

I’m totally digging what I’m hearing of the new Plasticsoul record, recent additions to my iPod include albums by Richard Swift, the new Lindi Ortega record is phenomenal, The Meters, the new My Morning Jacket, Dawes, plus I’m in the midst of a couple biographies on Kirsty MacColl so I’ve been pouring through her back catalog as well. Sam Phillips is a huge influence on my work, as is Harry Nilsson – Jon Brion – Prince – Elton John – The Eels, along with some of my peers (The Breakups, The Running Jumps, Calico, Chris Price, etc). I’m constantly cramming my iPod full of music, every day there’s something new and I never feel like I’ll ever hear it all. It’s a beautiful ride, this music trip :)

Any plans to tour? What’s next?

Right now we’re polishing up the vinyl edition of Crayons & Angels, getting our Kickstarter perks & merch together – but I’m hoping to do some west coast dates over the fall – head up to Portland, Seattle, San Francisco etc. Excited to keep the conversation rolling on this record, so proud of everyone’s contributions and all the energy surrounding its release.  It’s been a beautiful creative season and I’m just trying as best I can to stay present and enjoy every moment.