Bringing the Sunshine Back: An Interview with Susanna Hoffs 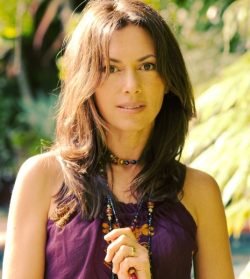 Twenty-six years have passed since Susanna Hoffs and the Bangles ruled the Billboard chart. With hits such as the Prince-penned “Manic Monday” and the cult smash “Walk Like an Egyptian,” the all-girl group was the perfect blend of grrl power, sex and pop music.

Now Hoffs is 53, and even though she continues to make and perform music with the Bangles, she has ventured out into new territory. For her third solo album, Someday, she is doing things her way, releasing it without the muscle (and influence) of a large record company. The bright pop sound is still there, but the punk attitude has been replaced by pianos and strings. Her lyrics are less flirtatious, more personal and direct. The result is a record that sounds nostalgic but fresh, recalling the bright pop moments of the late 1960s – think Dusty Springfield, the Left Banke or the Mamas and the Papas.

I talked with Hoffs last week about her new album and her new musical direction:

I was in Starbucks a few months ago and heard “Picture Me” [from the new album] for the first time. I noticed from your Tumblr blog that it sort of caught you by surprise. Did you ever figure out how that happened?

Well, I’m friends with a wonderful actress named Rosanna Arquette. She’s a huge music fan and had been such a supporter of my music. She comes to every single one of my performances and has been cheering me on. She was one of the first people I gave the record to last year before I ever even knew if it would ever see the light of day. Of course, I was determined to get the music out there, but I did the record on my own. I funded it myself and everything.

One of the cool things that happened that I haven’t actually told anybody about was that I gave it to Rosanna – I drove out to her house, gave her the CD. And then later in the day, one of her really good friends, Chrissie Hynde [of the Pretenders] came over. [Rosanna] later called me and told me that she played the whole record for Chrissie and that they both really liked it. Well, she was very determined to help me, and she happened to know the CEO of Starbucks. So she figured out a way to – she just sent it to him, I think, and she just put in a really good word about it, and then I never heard anything. Time passed, and one day I got a text message from another friend of mine who I had given the record to who lives in San Diego. She said, “Your record is playing at the Starbucks.” I assumed she was talking about the Bangles newest record, Sweetheart of the Sun. So I texted her back saying, “Oh, what song? They’re playing the Bangles record, right?” She said, “No, they’re playing your record.” Well, my record wasn’t even out. I mean, 10 people had a copy of it. So that’s how it got on Starbucks. And it was such an unbelievably cool thing.

The only problem was the record wasn’t out. I didn’t even have a distributor for it at the time. But the fact that they put it on – I guess they have at least 7,000 Starbucks. They have their own closed-circuit music channel. So they were playing it.

How did you manage to start working with a 27-year-old indie songwriter from Nashville for this?

Well, it was just one of those things. I met Andrew Brassell through my niece, who had just finished up at Vanderbilt University and had moved out to Los Angeles. Many of her friends were coming to visit her here. She’s a big music fan and had been growing up in Nashville, she’d been to all the different clubs checking out bands, and that’s where she met Andrew Brassell. He was real curious to see what it would be like to try to start up his career here in L.A. My family just instantly kind of adopted into our lives. We really liked him; we could tell he was very talented. When he ended up deciding to move to L.A., I offered up my guest room at our house to give him a little bit of a start here. And that just kind of morphed into this songwriting relationship. Then things started to move very quickly.

But earlier on when I was just getting to know him, we were driving around L.A. and I was showing him around, and I had this 60s station on (which I almost always do in my car) and I was really amazed at how familiar he was with the music of the 60s. Obviously, he was born in the 80s, he didn’t experience the 60s firsthand as I did. But he was so knowledgeable about it. So I thought it was interesting to me.

It’s been a really fun collaboration working with him. He’s so talented, and then the partnership of Brassell, [producer] Mitchell Froom and me – that’s just completed the team. We have Mitchell, who’s brought a certain musicality to what we were doing. The songs had all been written on guitar, just Brassell and I writing in the living room with two guitars, and then Mitchell coming in playing piano and all these orchestrations that he created were so spectacular.

You’ve always been influenced musically by the 60s, even with the Bangles. But with the Austin Powers gig and with this record you seem to have settled into more of a baroque pop/sunshine pop sound. What is it about that sound that attracts you as opposed to say, the Beach Boys or the Rolling Stones?

I think there’s not only a kind of beauty in it but a shameless embracing of melody. It also has an overt emotional quality. I always cite the Left Banke as a premier example of baroque pop, sunshine pop that you call it, which I think is a great way of describing it. The intensity of the emotion – It’s kind of the opposite of trying to play something cool. It’s just embracing the emotion in a way that is very moving to me. I’ve always been attracted to that. I think that there was a lot of that going on in the 60s.

Sometimes in going back and actually revisiting much of the music with an eye for the arrangement – a Bee Gees song like “To Love Somebody” and actually the Beach Boys too during the period when Brian Wilson was really crafting those arrangements on “God Only Knows” and those kinds of songs. But that era – Bee Gees songs, Glen Campbell – Tom Jones. [pullquote]I think there’s not only a kind of beauty in (baroque pop) but a shameless embracing of melody. [/pullquote] I’m a big Tom Jones fan. The intensity of the emotion is just so fantastic. I mean, they’re not holding back. It’s just interesting to me too, because I’ve been turned on to a lot of the new indie music that’s coming up through my kids and through Brassell and my niece. There’s just so much of a 60s influence starting to come back.

So you think there’s a revival of this type of genre on the horizon?

Definitely. I don’t have all the names of all the bands, but I know my older son was playing a few songs from the New Pornographers which is a supergroup of people who have been on the indie scene – I guess you’d say alternative pop. And there was so much of a 60s influence. And it’s everywhere. I mean, it’s starting to just really strike me that these young musicians are listening to what I consider the golden age of music, which was the 60s. And now it’s true for Brassell too. As I said, he was very familiar with that stuff. It’s good stuff.

It seems like lately we’ve been in a dark age.

Yes, let’s bring the sunshine back!

Any plans for a third collaboration of cover songs with Matthew Sweet – an Under the Covers Vol 3?

We’re working on it as we speak. Matthew’s been working on the tracks. He’s been touring a lot lately. And I’ve been busy with promoting the record and finishing it, and also having just had our Bangles record out last year. But yeah, it’s going to come out in 2013, hopefully very early in the year. My fall will be mostly touring behind this Someday record. I’ve got a couple of Bangles shows still on the schedule and I’m leaving tomorrow to go do a bunch of international shows with the band. But then it’s really completing Vol. 3, which we’re up to the 80s. So I think it’s going to be really good collection.

Anything else you want to add about the new record?

I’m just really so thrilled by the response. It’s one of those things like the wild wild West for musicians, at least for me in the recent years. I’ve just been in that position to have to do it all myself in terms of not having the structure of record companies as we knew them in the old days. I’m actually really enjoying the independence that that brings and to focus on the music rather than needing to deliver something that someone can market and work as a product. I don’t have any other considerations in making my records now besides just wanting to make music that I think is really good, and hoping that people will click with it.

The response to this record has just been overwhelming for me in a great way – the reviews and people saying nice things about it, and they seem to genuinely be enjoying it and that makes me just so thrilled. So there’s just a lot of gratitude right now.

1 thought on “Bringing the Sunshine Back: An Interview with Susanna Hoffs”